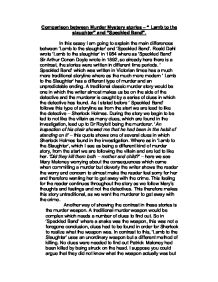 Comparison between Murder Mystery stories - " Lamb to the slaughter" and "Speckled Band". In this essay I am going to explain the main differences between 'Lamb to the slaughter' and 'Speckled Band'. Roald Dahl wrote 'Lamb to the slaughter' in 1954 where as 'Speckled Band' Sir Arthur Conan Doyle wrote in 1892, so already here there is a contrast, the stories were written in different time periods. ' Speckled Band' which was written in Victorian times has a much more traditional storyline where as the much more modern ' Lamb to the Slaughter' has a different type of murder and an unpredictable ending. A traditional classic murder story would be one in which the writer almost makes us be on the side of the detective and the murderer is caught by a series of clues in which the detective has found. As I stated before ' Speckled Band' follows this type of storyline as from the start we are lead to like the detective - Sherlock Holmes. During the story we begin to be led to not like the villain as many clues, which are found in the investigation, lead up to Dr Roylott being the murderer. 'An inspection of his chair showed me that he had been in the habit of standing on it' - this quote shows one of several clues in which Sherlock Holmes found in the investigation. Where as in 'Lamb to the Slaughter', which I see as being a different kind of murder story, from the start we are following the villain and are led to like her. 'Did they kill them both - mother and child?' - here we see Mary Maloney worrying about the consequences which came when committing a murder but cleverly the writer shows the reader the worry and concern to almost make the reader feel sorry for her and therefore wanting her to get away with the crime. ...read more.

The word 'uncontrollable' shows us that his anger is even out of his own hands and obviously struggles to calm himself down or for someone to calm him down. In 'Lamb to the Slaughter' the writer is clever in portraying Mary as a 'soft touch' because when she does actually commit the murder it makes the story much more exciting to see how she copes in covering it up. Readers begin to like Mary the moment she hits him with the leg of lamb. The reason for this is that they are glad Mary has finally 'come out of her shell'. I am not suggesting that what Mary did was right but I am suggesting that the readers will like her for doing it. For once in her life she stood up to Patrick and this is what makes this murder so good because no one expects such a timid almost frightened woman to come up with the shock surprise of killing this man. Dr Roylett however, is a very much different murderer. Mary and Dr Roylott are not similar in any way except for the fact that they both managed to commit serious crimes. Dr Roylott is a big boisterous man who has no courtesy for Sherlock Holmes - 'I know you, you scoundrel'. Calling Sherlock Holmes a scoundrel is very impolite and rude, showing no respect. In having no courtesy or respect for Sherlock Holmes, this straight away makes him a suspect for the murder, which Mrs Stoner described. This shows that Dr Roylott is not as clever as Mary because she realizes that she has to show she is upset and heartbroken about Patrick's death and shows much respect to the detectives on the case where as Dr Roylott immediately forces Holmes not to like him and makes himself a prime suspect for the murder. We know that Dr Roylott is a greedy, selfish man for the motive for which he killed Mrs Stoner's sister. ...read more.

This giggle is almost a cliffhanger. 'Lamb to the Slaughter' is quite an intriguing title as it has the word 'slaughter' in it. This word is to do with death and so therefore leaves the reader wondering what the word 'lamb' has to do with it all. The meaning of this title is revealed half way through the story when Mary commits the murder. This however is not the case in 'Speckled Band' because the title of this story is not revealed until the very end when Sherlock Holmes explains his findings and how the murder was solved. Although this title is less intriguing than 'Lamb to the Slaughter' I think that it had a better meaning behind it. The effect of having a less intriguing title is that it keeps the reader guessing, in contrast to this 'Lamb to the Slaughter' gives the reader something to think about such as 'lambs' or the word 'slaughter'. I am now at the end of my essay and have concluded that the main differences in these two stories are that when reading the openings of each story, 'Lamb to the Slaughter' is very calm and quiet where as 'Speckled Band' is lively and full of speech. The main difference in the two murderers is that Mary was clever enough and devious enough to fool the detectives but Dr Roylott was too obvious not to be the murderer. I also concluded that the detectives were very much different because Sherlock Holmes was very professional and did not mix business with pleasure, but Jack Noonan was too soft with Mary and this is the reason why he could not solve the case. The last contrast I found was in the endings where in 'Lamb to the Slaughter' we are left with something to think about, but in 'Speckled Band' the story is ended by Sherlock's speech leaving no more queries for the reader to think about. I hope I have covered all points necessary to prove that 'Speckled Band' and 'Lamb to the Slaughter' are different types of murder stories. ...read more.