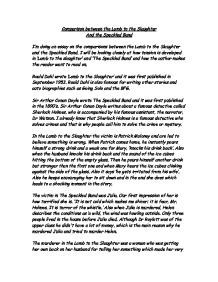 Comparison between the Lamb to the Slaughter And the Speckled Band

Also the checked the room and found out that there was a rope that should of made a bell sound but it didn't and a vent that leads to another room. They should lead to outside and the bed was clamped down to the ground of the room. I found the ability really fascinating because they were always on the job no stop. Also on the night when Sherlock Holmes and Dr Watson were at the estate trying to solve the mystery, Sherlock warns Watson and explains what to do, ''Do not go to sleep; your very life may depend upon it. Have your pistol ready incase we should need it...' Conan Doyle describes how both of them felt. The mentioning of 'pistol' and 'tension' builds up tension and so does the weather sounds. 'The wind was howling', 'crash of the gate'. This persuades the reader to read on. Holmes and Watson go to Stoke Moran at night and wait for the killer. It's a 'night with a chill wind'. This is similar to the conditions on the night Julia was murdered because it's the same weather the night that Julia died. ...read more.

Another thing is when Mrs Maloney acts in front of the police because when she was talking to the police she put on innocent eyes and an innocent face and tilted her head, which gave the impression that, she would never hurt anyone let alone her husband. 'She looked at him with large, dark, tearful eyes.' But an important part for the police, which again showed that Mrs Maloney could never kill Patrick, was the fact that she was pregnant and they were about to have a baby together so why would she want to kill Patrick? Mrs Maloney is always leading the blame of herself. This is totally different to the Speckled Band because Dr Roylott comes to visit Holmes and he is aggressive, violent and out of control which is making Holmes, Watson and the reader that he is capable of killing someone. In the 'Lamb to the slaughter' it is doing exactly the opposite and making the police and the reader think that is wouldn't be able to do such a thing. Another occasion where she is leading the police away from her is when she says 'I hope you catch him.' Again it's putting the blame on to a totally different person. So this is why I like Lamb to the slaughter better than the Speckled Band. ...read more.