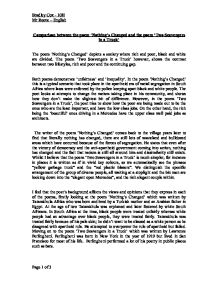 Comparison between the poem 'Nothing's Changed and the poem 'Two Scavengers in a Truck' The poem 'Nothing's Changed' depicts a society where rich and poor, black and white are divided. The poem 'Two Scavengers in a Truck' however, shows the contrast between two lifestyles, rich and poor and the continuing gap. Both poems demonstrate 'unfairness' and 'inequality'. In the poem 'Nothing's Changed' this is a typical scenario that took place in the apartheid era of racial segregation in South Africa where laws were enforced by the police keeping apart black and white people. The poet looks at attempts to change the r****m taking place in his community, and shows how they don't make the slightest bit of difference. However, in the poem 'Two Scavengers in a Truck', the poet tries to show how the poor are being made out to be the ones who are the least important, and have the low class jobs. On the other hand, the rich being the 'beautiful' ones driving in a Mercedes have the upper class well paid jobs as architects. The writer of the poem 'Nothing's Changed' comes back to the village years later to find that literally nothing has changed, there are still lots of wasteland and bulldozed areas which have occurred because of the forces of segregation. ...read more.

He sees a classy restaurant has been built with a guard stood at the gatepost. He thinks about the poverty surrounding it, especially the working man's caf�, where black people eat without plates from a plastic tabletop, this makes him think that although there are changes in political circumstances, there are also still inequalities between black and white people and nothing has changed. Although South Africa is believed to have altered, he senses that the posh and elegant restaurant is really 'whites-only', the annoyance makes him want to demolish the restaurant. Although nothing tells him so, the poet knows that this is where he is: "my feet know and my hands". Lawrence Ferlinghetti who wrote 'Two Scavengers in a Truck' is not involved in this poem as it is written in the 3rd person mode. The American belief "all men are created equal" is considered in this poem, and the red light is self-ruled, because it stops everyone from passing. They are divided by a "small gulf" and the gulf is "in the high seas of democracy", which implies that anyone can cross. I will consider the dissimilarity along with the organization of the two poems commencement with 'Nothing's Changed'. ...read more.

The man in the Mercedes is togged up in "A hip three piece linen suite" and the woman is wearing a "Short skirt with colored stockings"; the scavengers are Mucky and wearing "Red plastic blazers". One scavenger is old, hunched, with grey hair; the other is about the same age as the Mercedes driver and, like him, has long hair and is wearing sunglasses. The older man is thought of as the antonym of gorgeous, he is compared to as a "gargoyle" and to "Quasimodo". Both of the poems show inequality, and the fact that white people and rich people have the advantage over poor or black people. Both poets are angry about the ways of there neighborhood or birth place. The fact that because of wealth and the color of the pigments in skin you get treated unfairly and to a disadvantage to those rich successful white people. In the poem 'Nothings Changed' Tatamkhula Afrika has a personal experience in the problem that he is stating. He lived in the generation of Apartheid in South Africa and has experienced the inequality of black people. Whereas Lawrence Ferlinghetti has not expressed no personal experiences in the poem and has not used the powerful language that Tatamkhula Afrika has clearly used in the poem 'Nothing's Changed' ?? ?? ?? ?? Bradley c*x - 10H Mr Reeve - English Page 1 of 3 ...read more.