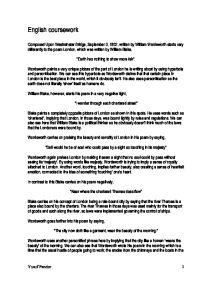 Comparison between the poems 'Composed Upon Westminster Bridge, September 3, 1802' and 'London'.

English coursework Composed Upon Westminster Bridge, September 3, 1802, written by William Wordsworth starts very differently to the poem London, which was written by William Blake, "Earth has nothing to show more fair". Wordsworth paints a very unique picture of the part of London he is writing about by using hyperbole and personification. We can see this hyperbole as Wordsworth claims that that certain place in London is the best place in the world, which it obviously isn't. He also uses personification as the earth does not literally 'show' itself as humans do. William Blake, however, starts his poem in a very negative light, "I wander through each chartered street" Blake paints a completely opposite picture of London as shown in this quote. He uses words such as 'chartered', implying that London, in those days, was bound tightly by rules and regulations. We can also see here that William Blake is a political thinker as he obviously doesn't think much of the laws that the Londoners were bound by. Wordsworth carries on praising the beauty and sanctity of London in his poem by saying, "Dull would he be of soul who could pass by a sight so touching in its majesty" Wordsworth again praises London by making it seem a sight that no soul could by pass without seeing its 'majesty'. ...read more.

In a literal sense, manacles are a pair of metal cuffs made by men to restrain people by physical force. But in this case the manacles are mind forged and the people are prisoned mentally and more in their mind rather than physical imprisonment. In specific, the fears of adults as well as children are causing stress and worry on everybody's mind and body, almost creating a feel of mental capture. William Wordsworth writes further, "Never did sun more beautifully steep In his first splendour, valley, rock or hill:" Wordsworth paints a bright and vivid image by using positive language. The above phrase basically means; never did the sun shine more beautifully than it shone upon London that day. Wordsworth uses positive language to create an encouraging outlook on London. Wordsworth also personifies the image of the sun by referring to it as 'he'. Blake moves deeper into his poem by saying, "How the chimney-sweeper's cry Every blackening church appalls; And the hapless soldier's sigh Runs in blood down in palace walls" From here we lose the sight of the narrator as begins to discuss his infuriated views on two specific types of social classes; the chimney sweepers and the soldiers. The poet of this poem uses certain language to describe the chimney sweepers. ...read more.

William Blake how ever ends his poem in a very depressing tone, "But most through midnight streets I hear How the youthful harlot's curse Blasts the newborn infant's cry And blights with plague the marriage hearse." In the above stanza, we understand that midnight has fallen. We also come to know of the problems families go through; this in it self describes the break down of the reproductive system of society itself. These problems occur due to young prostitutes rendering men 'unfaithful' to their wives. The harlot is a young sufferer just like the chimney sweepers. She has been deprived of the chance to love her newborn baby because it is a result of dishonesty rather than love. She may also pass her misery on to the child, and that child, like her may one day pass her misfortune unto further generations. She may also pass the disease to the 'unfaithful' husband, who will then unavoidably pass any infection onto their own real wives. Just Like the phrase, "mind-forged manacles", "Marriage hearse" is an effective phrase, full of meaning: the two words contradict each other, the idea of a happy, long marriage forgotten about by its grim reality, the possibility of a gloomy death by STD's. The phrase also shows all the hypocrisy in middle class marriage, the husband occasionally 'unfaithful' to his wife, and suggests the corruption of the married state. ?? ?? ?? ?? 1 Yusuf Pandor ...read more.