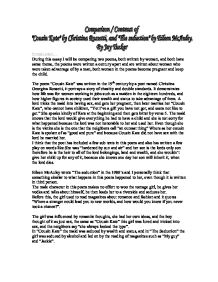 Introduction... During this essay I will be comparing two poems, both written by women, and both have same theme, the poems were written a century apart and are written about woman who were taken advantage of by a man, both women in the poems become pregnant and keep the child. The poem "Cousin Kate" was written in the 19th century by a poet named Christina Georgina Rossetti, it portrays a story of chastity and double standards. It demonstrates how life was for women working in jobs such as a maiden in the eighteen hundreds, and how higher figures in society used their wealth and status to take advantage of them. A lord tricks the maid into having sex, and gets her pregnant, then later marries her "Cousin Kate", who cannot have children, "Yet I've a gift you have not got, and seem not like to get." ...read more.

belongings, land and wealth, and she wouldn't give her child up for any of it, because she knows one day her son will inherit it, when the lord dies. Eileen McAuley wrote "The seduction" in the 1980's and I personally think that something similar to what happens in this poem happened to her, even though it is written in third person. The male character in this poem makes no effort to woo the teenage girl, he gives her vodka and talks about himself, he then leads her to a riverside and seduces her. Before this, the girl used to read magazines about romance and fashion and it quotes "Where a stranger could lead you to new worlds, and how would you know if you never took a chance?". ...read more.

Both of these poems portray the women to be naive and innocent. Both characters (The Maid & The Young Girl) feel betrayed by the men, in "The Seduction" the poet writes about how the girl has missed out on petty things like Glossy horoscopes, "Full of fresh fruit diets - how did she feel betrayed?" and in "Cousin Kate" the poet writes about how if she could marry the lord now she wouldn't have and how her intensions were totally honorable but he just used her and discarded her, "I would have spit into his face, and not have taken his hand" . In conclusion, both of these poems show how society looks down on pregnant young girls, and how times really haven't changed over 100 years, it also demonstrates how in the 19th century a young poor girl could be seduced by wealth and status and still this happens in the 21st century. ...read more.