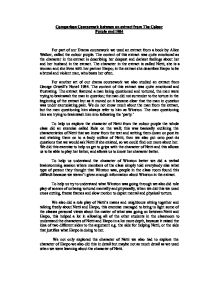 Comparison Coursework between an extract from The Colour

We did this exercise to help us get to grips with the character of Netti and this allows us to be able to play her better, and allows us to know her character better. To help us understand the character of Winston better we did a verbal brainstorming session where members of the class simply told everybody else what type of person they thought that Winston was, people in the class room found this difficult because we weren't given enough information about Winston in the extract. To help us try to understand what Winston was going through we also did role play of scenes of us being tortured mentally and physically, when we did this we used cross cutting, freeze frames and slow motion to depict mental and physical torture. ...read more.