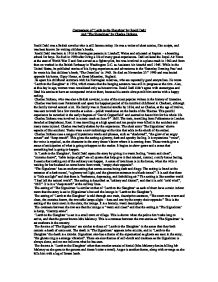 Comparison of 'Lamb to the Slaughter' by Roald Dahl And 'The Signalman' by Charles Dickens. Roald Dahl was a British novelist who is still famous today. He was a writer of short stories, film scripts, and was best known for writing children's books. Roald Dahl was born in 1916 to Norwegian parents in Llandaff, Wales and educated at Repton - a boarding school for boys. He died in 1990 after living a life of many great experiences. Dahl enlisted the Royal Air Force at the start of World War II and first served as a fighter pilot, but was involved in a plane crash in 1942 and from then on worked in the British Embassy in Washington D.C. as Assistant Air Attach� until 1945. While in the United States, he published stories of his flying experiences and adventures in the 'Saturday Evening Post' and he wrote his first children's book, 'The Gremlins' in 1943. He died on November 23rd 1990 and was buried opposite his home, Gipsy House, at Great Misseden, England. He spent his childhood summers with his Norwegian relatives, who are reportedly good storytellers. He wrote 'Lamb to the Slaughter' in 1954, which means that the hanging sentence was still in progress at the time. Also, at this day in age, women were considered only as housewives. ...read more.

"a student of natural philosophy, and had attended lectures; but he had run wild, misused his opportunities, gone down, and never risen again." This shows that he had misused his education as he is clever, but doesn't have to use his brain too much. The Signalman appears to be insane; he thinks that he has heard his bell ring, but it hasn't rang. "Did it ring your bell yesterday evening when I was here, and when you went to the door?" "Twice." "It did not ring at these times." The strange vibration of the bell causing the Signalman to go mad because he thought that a disaster was going to happen each time it rung, is put in to show that he might be going insane. In 'Lamb to the Slaughter', Mary Maloney is a realistic character. She appears to be an average, everyday housewife "waiting for her husband to come home from work." She is pregnant and well educated. She shows that she is clever as she gets the police to eat the evidence (the lamb). She is angry "at that point, Mary Maloney simply walked up behind him and without any pause she swung the big frozen leg of lamb high in the air and brought it down as hard as she could on the back of his head." ...read more.

- is the vision, and "I put this arm before my eyes not to see, and I waved this arm to the last; but it was no use." - is what the train driver tells the police that happened. Another premonition was that of "Look out! Look out! And then again: Halloa! Below there! Look out!" and the actual incident - "I said, Below there! Look out! Look out! For God's sake clear the way!" In 'Lamb to the Slaughter' it wasn't expected that there would be a female murderess, as she is a normal housewife, also - it wasn't expected that the murder would be at the beginning. I expected that Mrs Maloney would be murdered, as she appears so innocent. I think that Charles Dickens was trying to show a different perspective on life. In Charles' life, he had a short time, as a child where he was living in the slums and he involves this in his story. He is trying to show the rich what happens to the poor. Roald Dahl wrote for entertainment. He shows in his story what a fine line there is between love and hate. He uses stereotypes to try and prove things wrong. People would assume that the man kills the women that the man goes to work while the wife sits at home. He shows that women are just as capable of killing their husbands as of husbands killing their wives. ...read more.