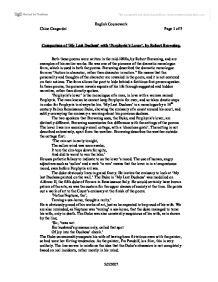 Comparison of 'My Last Duchess' with 'Porphyria's Lover', by Robert Browning. Both these poems were written in the mid-1800s, by Robert Browning, and are examples of his earlier works. He was one of the pioneers of the dramatic monologue form, which is used in both the poems. Browning described the dramatic monologue form as "Action in character, rather than character in action." He means that the personality and thoughts of the character are revealed in the poem, and it is not centered on their actions. The form allows the poet to hide behind a fictitious first person speaker. In these poems, the persona reveals aspects of his life through suggested and hidden narrative, rather than directly spoken. 'Porphyria's lover' is the monologue of a man, in love with a woman named Porphyria. The man knows he cannot keep Porphyria for ever, and so takes drastic steps in order for Porphyria to always be his. 'My Last Duchess' is a monologue by a 16th century Italian Renaissance Duke, showing the emissary of a count around his court, and subtly conveying the emissary a warning about his previous duchess. The two speakers that Browning uses, the Duke, and Porphyria's lover, are distinctly different. ...read more.

Although Porphyria's lover does kill her, there is still a tenderness and emotion in his monologue that is not apparent in 'My Last Duchess'. The lover seems capable of more emotion than the duke. It was the lover who sat in the cold cottage in a storm, and 'listened with heart fit to break' for Porphyria's return. The Duke, however, only has the faded memory of his anger and jealousy towards the Duchess. The poem does not serve as a picture of the Dukes emotions, just to show us the warning to the emissary, the silent listener of the poem These differences of outlook also show themselves in the way that the Duke and the lover murder their respective women. The Duke kills his duchess out of hatred and jealousy. He tells the emissary: 'I gave commands And then all smiles stopped together.' This method of murder, simply giving commands to another man is extremely impersonal compared to that of Porphyria. Porphyria's lover killed her with emotion, and debatably, he killed her out of love. He simply 'found a thing to do': 'All her hair In one yellow string I wound Three times her little throat around And strangled her.' ...read more.

The Duchess especially seems innocent, as the Duke tells the emissary that 'The white mule/She rode with round the terrace.' A white mule is symbolic, as white represents purity, and a mule is sterile, and so represents chastity. This subtext reinforces the idea that the murder of the Duchess was not necessary. On a similar note, when Porphyria enters into the lover's cottage, she removes 'her soiled gloves'. This indicates that Porphyria, unlike the duchess, lacks purity. It also highlights the fact that this may be an illicit relationship. There is not much more revealed about the women in the poetry than what has already been mentioned. This is because the main focus of the poems is the actions and mentality of the men, and so it is easier for the women to be simple but charming creatures. Due to the form of these poems, we do not learn anything about the views and attitude of Robert Browning, the poet. He has, however, used literary devices such as pathetic fallacy to help convey the hidden subtexts of the poems to the readers. The differences of language are also used to highlight the differences in character of the two speakers. English Coursework Chloe Cangardel Page 1 of 3 5/2/2007 ...read more.