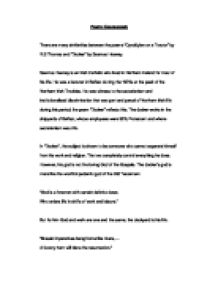 Comparison of Cynddylan on a Tractor by R.S Thomas and Docker by Seamus Heaney.

Poetry Coursework There are many similarities between the poems "Cynddylan on a Tractor" by R.S Thomas and "Docker" by Seamus Heaney. Seamus Heaney is an Irish Catholic who lived in Northern Ireland for most of his life. He was a lecturer in Belfast during the 1970s at the peak of the Northern Irish Troubles. He was witness to the sectarianism and institutionalised discrimination that was part and parcel of Northern Irish life during this period; the poem "Docker" reflects this. The docker works in the shipyards of Belfast, whose employees were 95% Protestant and where sectarianism was rife. In "Docker", the subject is shown to be someone who cannot separate himself from his work and religion. The two completely control everything he does. However, his god is not the loving God of the Gospels. The docker's god is more like the wrathful pedantic god of the Old Testament. "God is a foreman with certain definite views Who orders life in shifts of work and leisure." But for him God and work are one and the same; the dockyard is his life. "Mosaic imperatives bang home like rivets,... A factory horn will blare the resurrection." These lines also demonstrate Heaney's sympathy for his subject. His commandments or prejudices have been hammered into him "like rivets", his only understanding of religion is through the medium of his work, "a factory horn will blare the resurrection". The docker is no specific person, he could be anyone. ...read more.

Heaney uses informal language such as "Oh yes..." and "the wife" to convey this. R.S Thomas was a Church of England minister and from 1942-54 he was Rector of Manaton, a hilly isolated area of south Wales, much of it uninhabited. As an adult, he learned the Welsh language in order to understand the farmers in his parish. Much of his poetry is about the people of Manaton, reflecting their lives and their culture. R.S Thomas writes the poem "Cynddylan on a Tractor" as a warning to mankind about the destruction of nature caused by mankind's insensitivity to nature. He portrays Cynddylan, sitting proud on his tractor as being insensitive and destructive. He does not see the beauty of the countryside that is around him, yet he believes that he is innovative, he is modernising his agricultural technique. Yet R.S Thomas is not a Luddite, he is not against progress or invention, but in this poem he is warning about the folly of pride. It is Cynddylan's pride which causes him to be oblivious to the damage he is causing to nature. However this is not a poem about a specific person; it is an everyman story - "Cynddylan" is the Welsh for "man". Thomas uses many different techniques effectively to portray Cynddylan. The connotations of the language describing Cynddylan and his actions are all pejorative, "breaking", "emptying", "scattering". ...read more.

To an extent he empathises with him, he doesn't condemn the man, but he condemns what he is doing. Both men, the docker and Cynddylan, are totally unaware of the harm they are doing to the people and the environment around them. Furthermore, the issues raised in the poems are enduring. Prejudice persists in every corner of the world and issues surrounding the environment are more relevant now than they have ever been with the advent of global warming and climate change. Anyone can learn from the poems - they are universal. Similarly, both poems are sixteen lines long. "Docker" however is split into four quatrains whereas "Cynddylan on a Tractor" is written continuously. Each of the four quatrains in "Docker" present a section of the subject's life; sitting in the pub, his sectarianism, his uncompromising religion and his domestic life. The imagery, however, in each poem is contrasting; in "Docker" it is harsh and industrial; in "Cynddylan on a Tractor" it is pleasant and natural. Personally, I prefer the poem "Docker" because, as I live in Northern Ireland, it has more resonance with my life. Although it is set before I was born, the prejudices and the destructive religious fervour Heaney describes are still commonplace if less obvious and socially acceptable. To an extent, I can empathise with the "docker" and his rigid religiosity. However, I also like "Cynddylan on a Tractor". I can understand Thomas' exasperation with people's undeserved pride in their possessions and dominion over nature. ...read more.