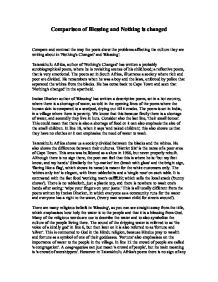 Comparison of Blessing and Nothing is changed

Comparison of Blessing and Nothing is changed Compare and contrast the way the poets show the problems affecting the culture they are writing about in 'Nothing's Changed' and 'Blessing'. Tatamkhulu Afrika, author of 'Nothing's Changed' has written a probably autobiographical poem, where he is revisiting scenes of his childhood; a reflective poem, that is very emotional. The poem set in South Africa, illustrates a society where rich and poor are divided. He remembers when he was a boy and the laws, enforced by police that separated the whites from the blacks. He has come back to Cape Town and seen that 'Nothing's changed' in the apartheid. Imtiaz Dharker author of 'Blessing' has written a descriptive poem, set in a hot country, where there is a shortage of water, as told in the opening lines of the poem where the human skin is compared to a seedpod, drying out till it cracks. The poem is set in India, in a village where there is poverty. We know that this because firstly there is a shortage of water, and secondly they live in huts. Consider also the last line, 'their small bones'. This could mean that there is also a shortage of food or it can also emphasis the size of the small children. In line 18, when it says 'and naked children', this also shows us that they have no clothes or it can emphasise the need of water to wash. ...read more.

The title of the poem does not just say that thing's have not changed, but disappointment that the expected change has not happened. 'Nothing's Changed' is a political poem whereas 'Blessing' is not. On one hand Tatamkhulu Afrika's poem has an angry tone because nothing has changed and that the city is still segregated. The colour white becomes symbolic of anger in line 15, 'and the hot, white, inward turning anger...' On the other hand 'Blessing' has a joyful tone because they have received what they wanted and their problem has been solved. If the poem is to be read out aloud then the reader would read the beginning in a pitiful voice, sympathising with the poor of India, but then excitedly, celebrating the blessing of the pipe bursting. Both poems use echoes in their poems. In 'Nothing's Changed', 'bone' is echoed again later in the poem to emphasis the ironic r****m when the writer is saying the blacks are born to poverty. In 'Blessing' the word 'voice' is later echoed with 'sings' to emphasis the blessing's importance. 'Blessing' has a single central metaphor that extends throughout the whole poem: giving of water as a 'blessing' from a 'kindly god'. Water is the source of other metaphors: fortune is seen as a 'rush' (like water rushing out of the pipe), and the sound of the flow is matched by that of the people who seek it - their tongues are a 'roar', like gushing water. ...read more.

There is a lot of imagery in both of the poems. In 'Blessing' the poem opens with a striking image of dryness, ('The skin cracks like a pod'). This simile gives the effect of visual imagery. When the water appears, we get words like 'rush', 'burst', 'crash', 'flow' and 'roar'. These are all onomatopoeic words which create auditory imagery and helps us hear what the water sounds like. The viewpoint in 'Nothing's Changed' is very well established because we can place ourselves 'in the poets shoes'. It is as if we are walking on the rough ground and see everything he sees. Both poems have different symbols in their poems. In 'Nothing's Changed' the important image is 'glass'. it symbolises the division of colour and class. Afrika sees himself as a "boy again", who has left imprint on glass. He wants to break glass. This is very symbolic because he wants to break down system, which divides people in South Africa. In 'Blessing' the most obvious symbol is water, by the way it is shown and referred to as holy. The poem compares firstly the human skin to a seedpod, drying out and then the reader is to imagine the dripping of the water. When the 'municipal pipe' bursts, it is seen as unexpected good luck, but at the end of the poem, Imtiaz Dharker reminds us of the sun, which causes the skin to crack 'like a pod' again. So it gives us a sad ending by saying that the water is today's blessing but hen tomorrow will be drought. ...read more.