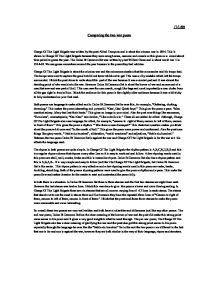 17/1/09 Comparing the two war poem Charge Of The Light Brigade was written by the poet Alfred Tennyson and is about the crimson war in 1854. This is shown in Charge Of The Light Brigade because they were using horses, cannons and swords so this gives us a round about time period to guess the year. The Dulce Et Decorum Est was written by poet Wilfred Owen and is about world war 1 in 1914-18. We can guess somewhere around the year because in the poem they had vehicles. Charge Of The Light Brigade is about the crimson war and the miscommunication that the commander and his troops had. The troops were sent to capture the guns but did not know which set to get. This was a silly mistake which left the troops surrounded. I think the poet chose to write about this part of the war because it was a crucial part and it was almost the deciding point of who would win the war. ...read more.

This gives the poem a rhythm. " Was there a man dismayed?" This rhetorical question makes you think about the poem a bit more and "In the mouth of h**l." This gives the poem more power and excitement. Also the poet uses things like glory words, " Noble six hundred", alliteration, "world wondered" and adjectives, "Noble six hundred." Between the two poem Dulce Et Decorum Est is against the war and Charge Of The Light Brigade is for the war so this affects the language used. The rhyme in both poems are quite simple. In Charge Of The Light Brigade the rhythm pattern is A,B,C,B,D,B,E and this is a regular rhyme scheme that rhymes every other line so it is easy to work out and follow. A few rhyming words used in this poem are shell, well, smoke, broke and this is masculine rhyme. Dulce Et Decorum Est also has a rhyme pattern and this is A,B,A,B... ...read more.

I think that the poet used these three stanzas to make the poem more memorable and more interesting. So overall these two poems are very well written and both have similarities and differences just like any other poems. The anti war poem, Dulce Et Decorum Est has the clear meaning of the horrors of war and the poet did make this strong point come across in his poem and it gives a very good insight to what he went through. The pro war poem, The Charge Of The Light Brigade also has a clear meaning of glorifying the war and the poet also got this strong point across in his poem especially through the language he uses like the "Noble six hundred." So in the end the two poems are different in the fact that one is for and one is against the war, however they are both similar in the way of their language, rhyme and structure. ...read more.