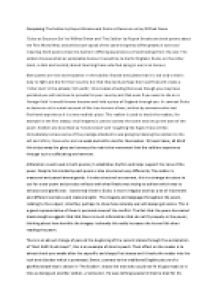 Comparison of Dulce et Decorum Est and The Soldier

﻿Comparing The Soldier by Rupert Brooke and Dulce et Decorum est by Wilfred Owen ?Dulce et Decorum Est? by Wilfred Owen and ?The Soldier? by Rupert Brooke are both poems about the First World War; and whilst both speak of the same thing they differ greatly in tone and meaning. Both poems show the Authors? differing experiences of and feelings from the war. The soldier stresses what an undeniable honour it would be to die for England. Dulce, on the other hand, is dark and morbid; almost taunting those who feel dying in war is an honour. Both poems are rich and evocative. In the soldier, Brooke articulates that it is not only a man?s duty to fight and die for their country but that they (and perhaps their sacrifice) will create a ?richer dust? in the already ?rich earth?, this creates a feeling that even though you may have perished you will continue to provide for your country and that even if you were to die on a ?foreign field? it would forever become and hold a piece of England through you. ...read more.

The fact that the poem has varied stanza lengths suggests that that there is much information that do not fit properly in the poem; thinking about how horrible the imagery is already this really increases the horror felt when reading the poem. There is an abrupt change of pace at the beginning of the second stanza through the exclamation of ?Gas! GAS! Quick boys!?, this is an example of direct speech. Their effect on the reader is to almost shock you awake after the soporific and sleepy first stanza and it hooks the reader into the rush and disorder which is portrayed. Owen, contrary to the traditional English picture of a glorified death that is shown in ?The Soldier?, shows the man who could not fit his gas mask on in time as being just another soldier, a 'someone'. He was nothing special in that he died for his country, he did not die fighting the evil enemy in hand to hand combat, or saving the lives of his fellow soldiers, rather he died because he was too slow to put a gas mask on. ...read more.

One of the main reasons why these poems, whilst talking about the same thing, are so different is because Rupert Brooke never saw or participated in any conflict as he died before they reached the battlefield. Thus, ‘The Soldier’ reflects the high expectations many soldiers like him held of war, naïve about what to expect apart from the glory men were told about when they signed up to fight. In contrast ‘Dulce et Decorum’ was written through by a man who had lived through and experienced all the horrors of the war and unlike Rupert Brooke, had fought in the awful conditions soldiers had to live in. Owen’s attitude to war was shown throughout the poem – how he believed it was not glorious at all but the opposite. This attitude is summed up by the declaration at the end of the last stanza; ‘The old Lie: Dulce et decorum est Pro patria mori.’ It is sweet and fitting to die for ones country. ...read more.

This student written piece of work is one of many that can be found in our GCSE English Language section.