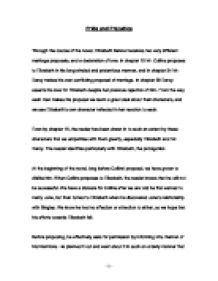 Comparison of Elizabeth Bennet's Marriage Proposals in Pride and Prejudice

Pride and Prejudice Through the course of the novel, Elizabeth Bennet receives two very different marriage proposals, and a declaration of love. In chapter 19 Mr. Collins proposes to Elizabeth in his long-winded and pretentious manner, and in chapter 34 Mr. Darcy makes his own conflicting proposal of marriage. In chapter 58 Darcy asserts his love for Elizabeth despite her previous rejection of him. From the way each man makes his proposal we learn a great deal about their characters, and we see Elizabeth's own character reflected in her reaction to each. Even by chapter 19, the reader has been drawn in to such an extent by these characters that we empathise with them greatly, especially Elizabeth and Mr. Darcy. The reader identifies particularly with Elizabeth, the protagonist. At the beginning of the novel, long before Collins' proposal, we have grown to dislike him. When Collins proposes to Elizabeth, the reader knows that he will not be successful. We have a distaste for Collins after we are told he first wanted to marry Jane, but then turned to Elizabeth when he discovered Jane's relationship with Bingley. We know he had no affection or attraction to either, so we hope that his efforts towards Elizabeth fail. Before proposing, he effectively asks for permission by informing Mrs. Bennet of his intentions. ...read more.

Darcy appears greatly agitated when he made his proposal. He enters her room and walks about for a while before speaking, even then to make a few awkward enquiries after Elizabeth's health. He was fervently in love with Elizabeth and speaks briefly and passionately. "In vain I have struggled. It will not do. My feelings are not to be repressed. You must allow me to tell you how ardently I admire and love you." This outburst is in sharp contrast to Collin's long pre-planned monologue, and shows true emotion instead of false sentiments of affection. But Darcy is also strikingly similar to Collins' in his arrogant presumption that she will accept him, "he spoke of apprehension and anxiety, but his countenance expressed real security". His utter bewilderment that she should refuse him "...no less resentment than surprise. His complexion became pale with anger, and the disturbance of his mind was visible in every feature." This demonstrates the same sort of conceit that Collins displayed. Darcy then goes on to insult her Elizabeth's family and circumstances. "Could you expect me to rejoice in the inferiority of your connections?" His insensitivity to Elizabeth is clear - he describes his feeling for Elizabeth as against his better judgement, "his sense of her inferiority - of it's being a degradation - of the family obstacles which judgment had always opposed to inclination." Again he shows himself to be proud, snobbish and superior, like Collins. ...read more.

She is also pleasantly surprised by Darcy's civility during her visit to Pemberley, and this too affects a change in her emotions. Each of them has helped the other become a better person; we feel the two are 'right' for each other. We feel confident that they will be contented together in married life and grow in mutual love and respect. After the correction of Elizabeth and Darcy's faults, the two have earned each other. They deserve a happy married life based on mutual devotion and financial security, with which Austen rewards them. I feel that Elizabeth was right to reject Collins - his focus on the financial and practical side of marriage was the antithesis to Elizabeth's ideal of love in married life. The marriage would not have been happy for either. I also feel that Elizabeth was right to reject Darcy's proposal of marriage. At that time, neither had had the opportunity to change in response to each other's criticisms, and as Elizabeth would have accepted his offer of marriage without truly being in love, we, the reader, would lose respect for her, as would Darcy, and it would appear her interest is fiscal rather than romantic. It would also be an unhappy marriage. I feel that Elizabeth was right to agree to marriage in the end. She had overcome her prejudice, and Darcy his pride, and we know that they are a good match for each other. We hope that they will have a secure and happy married life. ?? ?? ?? ?? - 1 - ...read more.