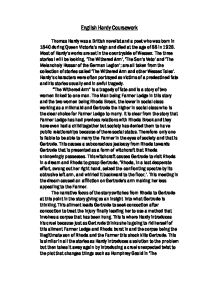 English Hardy Coursework Thomas Hardy was a British novelist and a poet who was born in 1840 during Queen Victoria's reign and died at the age of 88 in 1928. Most of Hardy's works are set in the countryside of Wessex. The three stories I will be looking, 'The Withered Arm', 'The Son's Veto' and 'The Melancholy Hussar of the German Legion'; are all taken from the collection of stories called 'The Withered Arm and other Wessex Tales'. Hardy's characters were often portrayed as victims of a predestined fate and his stories usually end in awful tragedy. "The Withered Arm" is a tragedy of fate and is a story of two women linked to one man. The Man being Farmer Lodge in this story and the two women being Rhoda Brook, the lower in social class working as a milkmaid and Gertrude the higher in social class who is the clear choice for Farmer Lodge to marry. ...read more.

This is where Hardy introduces his cruel because just as Gertrude thinks she is going to rid herself of this ailment Farmer Lodge and Rhoda burst in and the corpse being the illegitimate son of Rhoda and the Farmer this shock kills Gertrude. This is similar in all the stories as Hardy introduces a solution to the problem but then takes it away again by introducing a cruel unexpected twist to the plot that changes things such as Humphrey Gould in 'The Melancholy Hussar', coming home at the precise moment Phyllis was planning to escape with Matheus. In all these three stories there are problems with social status and especially marriage between those social ranks with Rhoda and the Farmer not being able to get married in 'The Withered Arm', Sophy and Sam in 'The Son's Veto' and Matheus and Phyllis in 'The Melancholy Hussar'. In 'The Melancholy Hussar' Hardy enhances the verisimilitude by showing detailed historical knowledge into the Hussar's uniform and also the way he states that Phyllis has passed this story on by word of mouth, 'Phyllis told me the story with her own lips.' ...read more.

After her husband's death she meets Sam, an old friend from her working class days. He proposes to her and describes a happy life they could lead together. Sophy explains the importance of her son, Randolph, in her life and suggests that she get his permission before marrying Sam. When she approaches her son he refuses to let her marry him. The 'Son's Veto' ends with Sophys death, never feeling worthy enough to have been her son's mother and never being courageous enough to marry her love. This is again another example of Hardy's cruel twists of fate and tragedy with Sophy dieing unhappy because her son objects to her marrying someone of that social rank. Lastly Hardy introduces his grim pessimistic view on life into each of these three stories and this plays the most significant part in making these stories such a work of art. This causes the reader to be thrown all over the place on the clever twists and them all ending in such fatal consequences of thwarted love. ...read more.