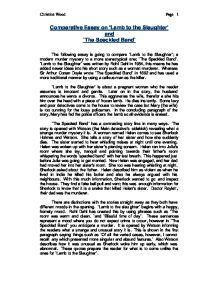 comparison of 'lamb of the slaughter' and 'the speckled band'

Comparative Essay on 'Lamb to the Slaughter' and `The Speckled Band` The following essay is going to compare `Lamb to the Slaughter`; a modern murder mystery to a more stereotypical one; `The Speckled Band`. `Lamb to the Slaughter` was written by Rohl Dahl in 1954, this means he has added newer ideas into his short story such as a woman murderer. Whereas Sir Arthur Conan Doyle wrote `The Speckled Band` in 1892 and has used a more traditional manner by using a callous man as the killer. `Lamb to the Slaughter` is about a pregnant woman who the reader assumes is innocent and gentle. Later on in the story, the husband announces he wants a divorce. This aggravates the wife, therefore she hits him over the head with a piece of frozen lamb. He dies instantly. Some lazy and poor detectives come to the house to review the case but Mary (the wife) is too cunning for the lousy policeman. In the concluding paragraph of the story, Mary has fed the police officers the lamb so all evidence is erased. `The Specked Band` has a contrasting story line in many ways. The story is opened with Watson (the Main detective's sidekick) revealing what a strange murder mystery it is. A woman named Helen comes to see Sherlock Holmes and Watson. She tells a story of her sister and how she suddenly dies. The sister started to hear whistling noises at night until one evening, Helen was woken up with her sister's piercing scream. Helen ran into Julia's room where she lay, tranquil and pointing towards their father's room whispering the words `specked band` with her last breath. This happened just before Julia was going to get married. Now Helen was engaged, and her dad had moved her into her sister's room. She too was hearing whistling at night. Sherlock asked about the father. ...read more.

`I believe Mr. Holmes, that you have already made up your mind`. Helen said earlier on in the story. I think there are many reasons why Sherlock does solve the case but Jack Noonan does not. It could be as Mary is a better villain, although I do not think this. I feel that Holmes has a better method because he studies everything and does not assume. Jack Noonan is more believable and is a standard detective of the time. Sherlock Holmes appears to have super-human thinking and notices everything. I think they are different like this because in 1892 Sherlock Holmes needed to be very clever and unique or people would not be very interested. In 1952 it was more acceptable to have normal people in the stories and not be a hero. I think another reason why Holmes solved the murder mystery is because it is based on Holmes and the reader wants him to solve the mystery, but 'Lamb to the Slaughter' is based on Mary Maloney who committed the crime, and the reader may want Mary to get away with it. These two different things happen because the authors persuaded the reader to want the main character of their story to succeed. `Lamb to the slaughter` is set in recent times and a place where a murder is not expected to occur; a house. This is unusual as it is a very warm, homely house; this is shown by the sewing and the loving couple that live in it. This atmosphere probably helped secure her alibi. On the opposing side, `The Speckled Band` is set in the 19th century. This is shown in the language when phrases are used such as `You may advise me how to walk amid the dangers which encompass me. ` This would rarely be found in modern books. Also, a bigger clue is when the author wrote that Helen rode on a dogcart. ...read more.

Grimesby Roylott's death, and I cannot say that it is likely to weigh very heavily upon my conscience` (with this the readers are left satisfied, knowing that good has overcome evil.) Although this is not as humorous as Mary's final comment it does not land on a sad note. The endings show that attitude towards murder and crime has changed over time, as the modern story is able to laugh at the failure of the detectives. I really enjoyed both stories for a number of reasons, but my favourite was `The Speckled Band`, this is because it has a more complex storyline which kept me enthralled with its subtle clues and stereotypical characters. But I was fond of the humor in `Lamb to the Slaughter` as Mary attempted to outwit the dim detectives. I also feel that `The Speckled Band` was more compelling, once again because of the suspense Sir Arthur Conan Doyle creates. In conclusion I have found many differences between these two stories, although similarities can be found. The main differences have been between Roald Dahl's unpredictable, female villain and average policemen, contrasting against Sir Arthur Conan Doyle's stereotypical, evil Dr Roylott and the super-human hero; Sherlock Holmes. But most of the dissimilarities are because of the time difference, as acceptable characters and storylines have dramatically changed since the 19th century. An example of this is; Sir Arthur Conan Doyle's murderer is a violent man as Roald Dahl's Mary Maloney would not be accepted. Also Sherlock Holmes catches the criminal as the Victorians would see it as unacceptable for evil to prevail. Another distinction is the language, `The Speckled Band' is written with deep description and detail as this shows Conan Doyle's intellectual ability. Roald Dahl has shown modern times by breaking all the rules that Sir Arthur has applied in his writing like the ones stated above. But the old fashioned murder mystery and the unique, modern story both successfully grasped me, so that I felt the sorrow and satisfaction, the absurdity and the apprehension. Christine Wood Page 1 ...read more.