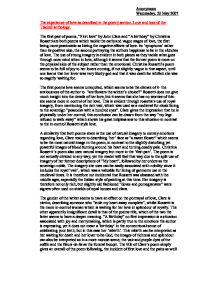 Anonymous Wednesday, 23 May 2007 The experience of love as described in the poetry section, Love and loss of the Tracks2 anthology. The first pair of poems, "First love" by John Clare and "A birthday" by Christina Rossetti are both poems which tackle the early and vague stages of love, the first being more pessimistic as listing the negative effects of love- its 'symptoms' rather than its positive side, the second portraying the authors happiness to be in the clutches of love. The use of strong imagery is evident in both pieces as they tackle what goes through ones mind when in love, although it seems that the former poem is more on the physical side of the subject rather than the emotional. Christina Rossetti's poem seems to be full of joy to her lovers coming, if not slightly vague in that aspect, until one learns that her lover was very likely god and that it was death for whi9ch she was so eagerly waiting for. The first poems love seems unrequited, which seems to be the climax of it- the anxiousness of the author to "are flowers the winter's choice?" ...read more.

lord Byron demands loyalty from his mistress, which is evident when he mentions that "light is thy fame", fame meaning her social status is that she could be regarded as a woman of 'loose' morals. The demands of Nesbit are quiet different, in light-hearted humour, she expresses her lust for romance and passion, which has evidently vanished, from her relationship. The relationship is not described in great detail, but it is very likely that they have been together for a long time; Nesbit's poem fits the description of a married couple-together for the sake of marriage. Lord Byron's attachment to his mistress, "Long, long shall I rue thee." Is evident through his choice of parting words in the first stance and the way he still seems to love her after all those "years". 'When we two parted' portrays love which is pulled like a puppet on strings by society, when her name is spoken of badly Byron knows that he cannot continue to love her in fear of exposing their relationship. The partnership was a concealed one, "in secret we met", kept away from the preying eyes of society for a reason that the poet does not give. ...read more.

Walsh uses words reminiscent of an alliance rather than the more conventional relationship of two lovers, "your comrade, friend, mate" "together" "co-equal", giving a very lucrative description of a relationship free of the afore mentioned (wingless angel etc.) conventional entities, not wanting to be a sex toy to satisfy his clamorous desire, but to know "the purity and height of passion", refusing to be a placid doll or a holy wingless angel and using clear and strong words to express this "fool, I refuse you!" to express her distaste for the men who take enjoyment in this. In the first stance, she expresses a different kind of disagreement than in the second or third since the latter does not require her to do any manual work, she refuses: "No servant will I be". Another point worth mentioning of the last stance is the way the marriage is described, the imagery used being so artistic and unusual; "music of the spheres for bridal march" , "The stars to laugh with joy" ,words which emphasise how different the marriage ceremony will be if the love is true and pure, if it is based on companionship and passionate love- a contradiction of the poets most despised image of the foolish man. ...read more.