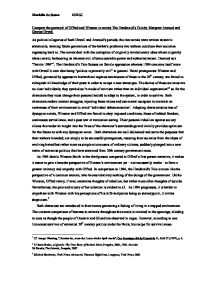 Comparison of Offred and Winston in 1984 and The Handmaid's Tale

Compare the portrayal of Offred and Winston in novels The Handmaid's Tale by Margaret Atwood and George Orwell As political allegories of both Orwell and Atwood's periods, the two novels were written as satiric statements, warning future generations of the barbaric problems two authors could see their societies regressing back to. The novels deal with the corruption of originally revolutionary ideas where oligarchy takes control, harbouring its inherent evil of unaccountable power and authoritarianism. Deemed as a "female 1984"1, The Handmaid's Tale focuses on female oppression whereas 1984 concerns itself more with Orwell's own idea being "politics is primarily evil" in general. Novel protagonists Winston and Offred, governed by oppressive hierarchical regimes reminiscent of those in the 20th century, are forced to relinquish all knowledge of their pasts in order to accept a new status quo. The deities of these societies are no clear individuals; they symbolise "a mode of activism rather than an individual organisation"2 so for the characters they must change their personal beliefs to adapt to the system, in order to survive. Both characters endure internal struggles, rejecting these values and use mental escapism to maintain an awareness of their environment to avoid 'individual dehumanisation'. Adopting characteristics true of dystopian novels, Winston and Offred are forced to obey imposed conditions, those of robbed freedom, continuous surveillance, and a post war or revolution setting. Their personal rebellion against society allows the reader an insight into the flaws of the character's surroundings and initially provides optimism for the future as with any dystopian novel. ...read more.

Neither women are political nor have a plan for change. In the Historical Notes, Offred apologises: "I'm sorry its in fragments like a body like a body being caught in a crossfire" Offred's plain desire to survive is channeled through private rebellion to ease her pain in a "mutilated story", reflecting the structure of the story. She has no systematic plan yet her intelligence stated as is Winston's, the conspicuous difference is how men are not being singled out for oppression in 1984. It is s****l unity in general that is dangerous - "forming loyalties" dangerous to the Oceanic regime so Winston can break more general rules. Whereas in The Handmaid's Tale, women are the target of repression and whilst s****l unity is dangerous, for Offred, in Gileadean society, women must remain subservient to survive which is a more difficult feat. Offred merely wants to make bearable to herself as a female, how it once was, rather than alter it altogether. Winston and Offred dream mainly of their families yet Winston with childhood regret and Offred with yearning regret. Winston sees his mother and sister: "...In the saloon of a sinking ship. Looking up at him through the darkening water." Although not as intimate as those of Offred, Winston's dreams still disturb him and begin to make him despise the party for rewriting history. With Winston's dwindling memories, Offred's remembrances create desire and longing, with recurring instances with her family: "Lying in bed, with Luke, his hand around my belly. ...read more.

On the other hand, Winston's strongest attribute is his desire to rebel. Being amongst the generation that is old enough to remember a different past gives him the motivation to strive for something that he is able to comprehend as attainable. His optimism yet paranoia of the Party catching up with him create hurdles, forcing him to doubt himself, leading to his demise. The most heart rendering aspect of Winston's character is his desperation to find a soul - mate that shares in his ideals. In totalitarian societies, the innate and dynamic instincts for survival always triumph so as readers, it is impossible to make a moral judgement on either character, in retrospect, questioning or criticising their actions. Orwell and Atwood chose to create characters of ordinary people demonstrating how life affected them when politics magnified its control and both provide strong characters who communicate their intended messages powerfully and uniquely. 1 Cf. Ansgar N�nning, "Literatur ist, wenn das Lesen wieder Spa� macht", Der fremdsprachliche Unterricht 31, Heft 27 (1997), p. 6. 2 12 Jason Burke, Al-Qaeda: The True Story of Radical Islam, Penguin, 2004, 1984. See also Ed Husain, The Islamist, Penguin, 2007 3 Michael Sherborne, York Notes Advanced, Nineteen Eight Four, Longman, York Press, 2003 4 Primo Levi, If This Is A Man/The Truce, Abacus, 2006 5 http://education.yahoo.com/homework_help/cliffsnotes/the_handmaids_tale/28.html 6 When our vices get the better of us, Oct. 11, 2007Courtesy Association for Psychological Science and World Science staff Mariella de Souza 13DGJ ...read more.