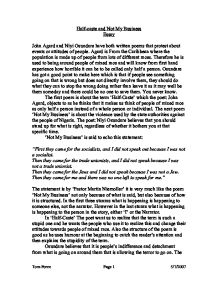 Comparison of the poems Half-caste and Not My Business.

Half-caste and Not My Business Essay John Agard and Niyi Osundare have both written poems that protest about events or attitudes of people. Agard is From the Caribbean where the population is made up of people from lots of different races. Therefore he is used to being around people of mixed race and will know from first hand experience how horrible it can be to be called only half a person. Osundare has got a good point to make here which is that if people see something going on that is wrong but does not directly involve them, they should do what they can to stop the wrong doing rather than leave it as it may well be them someday and there could be no one to save them. ...read more.

Then they came for me and there was no one left to speak for me." The statement is by 'Pastor Martin Niemoller' it is very much like the poem 'Not My Business' not only because of what is said, but also because of how it is structured. In the first three stanzas what is happening is happening to someone else, not the narrator. However in the last stanza what is happening is happening to the person in the story, either 'I' or the Narrator. In 'Half-Caste' The poet want us to realize that the term is such a stupid one and he wants the people who use it to realize this and change their attitudes towards people of mixed race. Also the structure of the poem is good as he uses humour at the beginning to catch the reader's attention and then explains the stupidity of the term. ...read more.

This is also indented and therefore shows distance from what is going on in the paragraph. This use of language is a good way to show this distance. This poem says a lot about people's cultures, not only Nigeria, but people are like this all over the world, and it says a lot that people won't stick up for what is right just so long as it does not bother them. Both of these poems had a lot to say and they have said it in a strong and down to earth kind of way. The first used humour to get people's attention and then had a go about the term 'Half-caste'. However the second just used three examples and then showed that a problem will get much worse if it is left and oppressive regimes are not nice things and people need to stick up and fight against them! Tom Force Page 1 5/7/2007 ...read more.