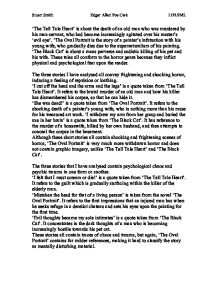 Comparison of 'The Tell Tale Heart', 'The Black Cat', and 'The Oval Portrait'.

'The Tell Tale Heart' is about the death of an old man who was murdered by his man servant, who had become increasingly agitated over his master's 'evil eye'. 'The Oval Portrait is the story of a painter's infatuation with his young wife, who gradually dies due to the supernaturalism of his painting. 'The Black Cat' is about a mans perverse and s******c killing of his pet and his wife. These tales all conform to the horror genre because they inflict physical and psychological fear upon the reader. The three stories I have analysed all convey frightening and shocking horror, inducing a feeling of repulsion or loathing. 'I cut off the head and the arms and the legs' is a quote taken from 'The Tell Tale Heart'. It refers to the brutal murder of an old man and how his killer has dismembered his corpse, so that he can hide it. 'She was dead!' is a quote taken from 'The Oval Portrait'. It refers to the shocking death of a painter's young wife, who is nothing more than his muse for his treasured art work. 'I withdrew my arm from her grasp and buried the axe in her brain' is a quote taken from 'The Black Cat'. ...read more.