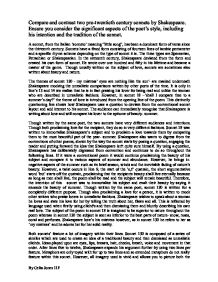 Compare and contrast two pre-twentieth century sonnets by Shakespeare. Ensure you consider the significant aspects of the poet's style, including his intention and the tradition of the sonnet. A sonnet, from the Italian 'sonneto' meaning "little song", has been a dominant form of verse since the thirteenth century. Sonnets have a fixed form consisting of fourteen lines of iambic pentameter and a specific rhyme scheme depending on the type of sonnet it is. The three types are Spenserian, Petrachian or Shakespearian. In the sixteenth century, Shakespeare deviated from the form and created his own form of sonnet. He wrote over one hundred and fifty in his lifetime and became a master of the genre. Though usually written on the subject of love, sonnets are sometimes also written about beauty and nature. The themes of sonnet 130 - my mistress' eyes are nothing like the sun'- are masked underneath Shakespeare mocking the unrealistic comparisons written by other poets of the time. It is only in line's 13 and 14 we realise that he is in fact praising his lover for being real and unlike the woman who are described in unrealistic fashions. However, in sonnet 18 -'shall I compare thee to a summer's day?' the theme of love is introduced from the opening line of the poem. This distinctly questioning line shows how Shakespeare uses a question to deviate from the conventional sonnet layout and add interest to his sonnet. ...read more.

In sonnet 8, imagery is used for an entirely different purpose. It used imagery of nature to describe the beauty of his subject. From the opening line, the poem is an extended metaphor. The first line creates the image of the summer's day of which the recipient is compared to and the following lines continue with that idea. This is completely different to sonnet 130 in which ideas are brought up then dismissed immediately. Shakespeare examines the extent to which he can call his love as perfect as a summer's day but realises that though it is used by hundreds of other poets it is not a very fitting example because nature's beauty inevitably fades away. He also uses personification in several cases, for example 'Nor shall death brag', death is an abstract noun and has been personified and given an emotion- to brag. Death has also been turned into a proper noun so that it seems more personal and powerful, the recipients beauty beats the power of death is the message Shakespeare is trying to give out. The subject of the sonnet's gender is also hinted at- in line 6 we are told about 'his gold complexion', which could refer to either the sun or to the subject. It could hint that the recipient was a male because the ancient sun god Apollo was imagined as a beautiful young man, which is apt. Shakespeare created his own form of sonnet and became a master. ...read more.

In sonnet 130, the rhythms in the poem are more like those of spoken language and the poem flows as if it were spoken -this is the aim of the iambic pentameter. However, in sonnet 18, the language is far more formal in comparison to 130, which could suggest a greater distance between Shakespeare are the subject of sonnet 18. In 130, the recipient is referred to as 'My mistress', whereas in sonnet 18 there are no possessive prefix's comparable to that in 130. The reason why there is colloquial language in sonnet 130 could be because the recipient is not of such a high class as the recipient in 18 and the language used will be far simpler so the meaning could be put across, or it could possibly be to echo the idea that his lover does not have to be fancy and be described with long, ridiculous words for him to love her. For example, in sonnet 130 words used to describe the lover are 'reeks', something that brings to mind an awkward stench, whereas in 18 'temperate', 'untrimm'd' and 'eternal' are words used, all with far more syllables within them and sounding far more impressive than 'reeks'. To conclude, though the two Shakespearian sonnets I have just examined share the same main theme, they differ in language used, Shakespeare's intentions when writing the poem, gender of the recipient, imagery used and other figurative language. However, they both revolve around the same subject of praising a lover but go about it in very different ways. ?? ?? ?? ?? By Celia Jones 11F ...read more.