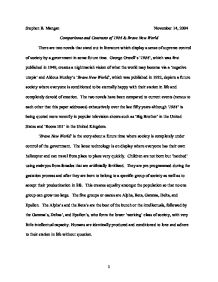 Stephen B. Mangan November 14, 2004 Comparisons and Contrasts of 1984 & Brave New World There are two novels that stand out in literature which display a sense of supreme control of society by a government in some future time. George Orwell's `1984', which was first published in 1949, creates a nightmarish vision of what the world may become via a `negative utopia' and Aldous Huxley's `Brave New World', which was published in 1932, depicts a future society where everyone is conditioned to be eternally happy with their station in life and completely devoid of emotion. The two novels have been compared to current events (versus to each other that this paper addresses) exhaustively over the last fifty years although `1984' is being quoted more recently in popular television shows such as `Big Brother' in the United States and `Room 101' in the United Kingdom. `Brave New World' is the story about a future time where society is completely under control of the government. The latest technology is on display where everyone has their own helicopter and can travel from place to place very quickly. Children are not born but `hatched' using embryos from females that are artificially fertilized. They are pre-programmed during the gestation process and after they are born to belong to a specific group of society as well as to accept their predestination in life. This creates equality amongst the population so that no one group can grow too large. The five groups or castes are Alpha, Beta, Gamma, Delta, and Epsilon. The Alpha's and the Beta's are the best of the bunch or the intellectuals, followed by the Gamma's, Deltas', and Epsilon's, who form the lower `working' class of society, with very little intellectual capacity. Humans are identically produced and conditioned to love and adhere to their station in life without question. Conditioning continues as humans are taught to consume goods in the capitalist system and to constantly undergo activities to support society, even when they are not working. ...read more.

(Tirohl) Bernard Marx in Brave New World also believes that governmental control is too strong. He is an Alpha Plus Intellectual who also works for the government but feels he does not fit in with society. "His discomfort with the commodification of sex marks him as a misfit" (Sparknotes). Like Winston in 1984, Bernard is also a rebel but not so much against the government but more of an innate feeling that he doesn't belong. "It comes from a sense that he might never fully belong to that society." (Sparknotes) Bernard doesn't like taking soma to relieve his conflicted emotions and is in disagreement with how sex is talked about so openly. When Lenina accepts Bernard's invitation in front of a group of people to go on holiday together, Bernard is embarrassed and wishes she could have mentioned it in private. "Bernard feels terrible because Lenina behaved like a `healthy and virtuous English girl', that is, someone unafraid of discussing her sexual life in public." (Sparknotes) Bernard displays sexual jealousy when speaking with Lenina, unlike Winston in 1984, who is quite ecstatic that Julia has had many sexual encounters with upper Party members. Winston perceives this sexual act as rebellious as sex is not supposed to be for fun. Like Winston's relationship with Julia, Bernard has a relationship with both Lenina and Helmholtz. Helmholtz shares Bernard's rebellious ideas such as not participating in sex orgies, not taking soma, belief that the society is totalitarian, and viewing themselves as individuals. The essay in Sparknotes concludes similarities with Bernard and Helmholtz, both Alpha Plus who share a "...mutual dissatisfaction with the status quo and their shared inclination to view themselves as individuals." (Sparknotes) In converse to Bernard, Helmholtz believes that society is too happy and there must be more meaning. Lenina is unlike Julia although she does display four month affection for only one man, Henry Foster, which is frowned upon. ...read more.

Both stories use Shakespeare to draw out emotions from the pre-programmed society. In 1984, they hang their enemies whereas in Brave New World they are sent off to Isolation as defects. Soma is the drug of choice in Brave New World, its synthetic gin in 1984. Both drugs are used to reduce or repress their emotions when conditioning and brainwashing have failed. The governments in both stories believe they have created a utopia but have really created a dystopia. However, they contrast greatly in their methods. In Brave New World Revisited, Huxley explains `The society described in Orwell's fable is a society permanently at war, and the aim of its rulers is first, or course, to exercise power for its own delightful sake, and, second, to keep their subjects in that state of constant tension which a state of constant war demands of those who wage it...The society described in Brave New World is a world-state, in which war has been eliminated and where the first aim of the rules is at all costs to keep their subjects from making trouble." (Huxley, 21) In 1984, society has been scared into believing anything by using fear of war and occasionally dropping bombs on the city to continue the fear. They also use physical torture via brainwashing when the telescreen doesn't work and have to constantly monitor its citizens. In Brave New World, everyone is happy. The government doesn't need to use physical torture or constant monitoring. They achieve their success by "legalizing a degree of sexual freedom (made possible by the abolition of the family) that practically guarantees the Brave New Worlders against any form of destructive (or creative) emotional tension. In 1984 the lust for power is satisfied by inflicting pain; in Brave New World, by inflicting a hardly less humiliating pleasure." (Huxley, 21) It is this contrast in approaches to the same tenets that make a comparison worth pursuing. Huxley believes his version of the future is becoming real and discounts some of Orwell's claims. Regardless, they both offer rather scary and realistic propositions of the future ahead. ...read more.