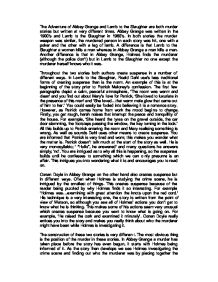 Comparte The Adventure of Abbey Grange and Lamb to the Slaughter.

Conan Doyle also depicts how inept the police are by them not being able to capture them and Holmes finding the murderer, Captain Crocker, with ease and even ends up not handing him into the police and letting him go free; 'if you choose to disappear in the next 24 hours...no one will hinder you'. In both stories, for the crime of murder, the death penalty would have been enforced. Shortly after Mary Maloney kills Patrick in Lamb to the Slaughter she thinks about the death penalty; 'She knew what the death penalty would be...that was fine. It made no difference to her.' She goes on, however to think about whether pregnant women (like herself) are killed. This is unsurprising as the death penalty was only finally abolished in 1969, however the last person to be killed was only in the early 60's so it was unlikely she would have been killed. In both stories the personalities of the characters are stressed quite highly. Especially in Abbey Grange where a good deal of time is spent by Conan Doyle in getting the reader to know the characters. Out of the two stories I personally feel more sorry for Crocker rather than Mary Maloney. ...read more.

So I feel that Abbey Grange dwells on sensational detail to a greater extent than Lamb to the Slaughter because almost the whole of Abbey Grange's suspense is built up around the investigation and the murder itself doesn't even take place in the story. Personally I feel I prefer Abbey Grange as a murder story for a number of reasons. I enjoy the attempt at trying to work out who the murderer was yourself before you are told. I also find it enjoyable to see Holmes investigating and trying to get into his mind and think what he is thinking as he looks at the evidence and tries to piece it all together. Another reason I like Conan Doyle's story more is because of the last couple of pages. As with most good murder mysteries it ends with a summing up where Holmes' puts all the evidence together so that the reader can fully understand why it was the murderer who he then announces. It is difficult to say whether 100 years has made a difference to the formula of a detective story. Although certainly these two stories are very different you cannot generalize. You would have to take a large selection of murder stories from the two time periods to get a true understanding of murder stories from the 1890's compared to those of the 1960's. ...read more.