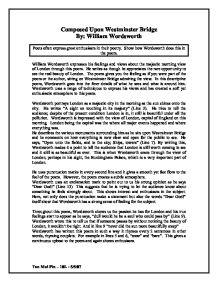 Composed Upon Westminster Bridge - Poets often express great enthusiasm in their poetry. Show how Wordsworth does this in the poem.

Composed Upon Westminster Bridge By: William Wordsworth Poets often express great enthusiasm in their poetry. Show how Wordsworth does this in the poem. William Wordsworth expresses his feelings and views about the majestic morning view of London through this poem. He writes as though he appreciates the rare opportunity to see the real beauty of London. The poem gives you the feeling as if you were part of the poem or the author, sitting on Westminster Bridge admiring the view. In this descriptive poem, Wordsworth goes into the finer details of what he sees and what is around him. Wordsworth uses a range of techniques to express his views and has created a soft yet enthusiastic atmosphere to this poem. ...read more.

This is when Wordsworth scans through the view of London, perhaps in his sight, the Buckingham Palace, which is a very important part of London. He uses punctuation marks in every second line and it gives a smooth yet fast flow to the feel of the poem. However, the poem creates a subtle atmosphere. Wordsworth uses an exclamation mark to point out to us his strong opinion as he says "Dear God!" (Line 13) This suggests that he is trying to let the audience know about something he feels strongly about. This shows interest and enthusiasm in the subject. Here, not only does the punctuation make a statement but also the words "Dear God!" ...read more.

A very intense poem of the radiant picture London has put in front of him. As he writes "The City now doth in garment wear". Perhaps he is trying to tell he audience London shines like royal clothing as the sun shines onto the city. Although Wordsworth portrays London in different aspects, they all indicate the same point, his enthusiasm and interest in London. In my opinion, William Wordsworth has a lot of passion in writing especially in this poem. He tries to make a positive point about London. The poem, though a slightly complicated poem on the first read, will make an impact as you begin to understand the true meaning to it. He has developed a sense of calmness to the poem. Tan Mui Pin - 10L - 5/5/07 ...read more.