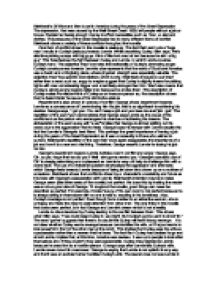 Conflict is often shown throughout the novella of 'Of Mice and Men'. Usually, it is a result of the strain that the Great Depression placed on the people who lived through it.

Steinbeck's Of Mice and Men is set in America during the years of the Great Depression. The depression, that was caused by the Wall Street Crash 1929, left people without a job or house. People had barely enough money to afford necessities such as, food, water and clothes. The pressures of the Great Depression led to many different forms of conflict. Steinbeck shows a variety of these conflicts throughout the novella. One form of conflict shown in the novella is Jealousy. The fact that Lennie is a 'huge man', results in Curley's jealousy towards Lennie. While describing Curley, Slim says, 'He's alla time picking scraps with big guys. Kind of like he's mad at 'em because he aint a big guy'. This foreshadows the fight between Curley and Lennie in which Lennie crushes Curley's hand. The adjective 'mad' connotes the irrationality of Curley's simmering anger. Curley's covetousness towards Lennie's size represents that the world of Dust bowl America was a harsh and unforgiving place, where physical strength was especially valuable. The adjective 'mad' has specific connotations which is why, Steinbeck chooses to use 'mad' rather than a word such as, angry to maybe suggest that Curley is slightly insane for picking fights with men considerably bigger and most likely stronger than him. ...read more.

Steinbeck shows that conflict is driven by a character's uncertainty and future as it is here with George's exasperation with Lennie. Steinbeck's intention may be to make George seem (like other areas of the novella) not perfect. He does this by making the reader see a not so good side of George. Throughout the novella, good things can never be described as perfect. For example, Crooks' luxury of his own room is not perfect because he is always sitting in there alone with no one to talk to, resulting in his loneliness. Also, Curley's marriage is not perfect. Even though he is married to an attractive woman, she is unhappy and feels the need to seek attention from other men. The only thing in the novella that does seem perfect, is in fact George and Lennie's dream which is not a reality. Lennie is misunderstood by Curley leading to the conflict between them. This shows when Slim says, 'If we could keep Curley in, we might. But Curley's gonna want to shoot 'im.' The word 'gonna' suggests that there is no doubt that Curley will want b****y revenge. ...read more.

The fact that Curley's wife says, 'could' rather than 'will', suggests that she is uncertain to whether she would actually get Crooks 'strung up on a tree'. This is again highlighted when she says, 'it aint even funny'. She says this to try and make herself sound serious as she perhaps knows that she would never do it. The reader possibly feels sympathy towards Curley's wife due to the fact that, the reader knows that she doesn't really want to talk to Crooks or Lennie - she is just lonely. The reader feels this way despite Curley's wife's malicious use of r****m. Conflict is often shown throughout the novella of 'Of Mice and Men'. Usually, it is a result of the strain that the Great Depression placed on the people who lived through it. An example of this, is the conflict between George and Lennie which is a consequence of their overwhelming desire to achieve their dream. The main aspects of conflict are shown through: jealousy, resentment, r****m and misunderstand. Steinbeck uses 'Of Mice and Men' to portray these factors in a powerful way. He does this by showing them through other characters also such as, Curley and his wife. There was a lot of conflict during the years of the Great Depression and Steinbeck demonstrates this in his novella. ...read more.

This is an extremely well-structured and sophisticated response which examines thoroughly the theme of conflict. The points made are relevant and supported by apt examples and quotations. The writer's craft and word choice is examined extremely well and linked to audience response. The social and historic context of the book is also referred to. There is a need to proof-read in order to amend some minor errors including spaces in words.