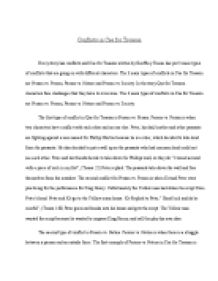 This will lead to less people coming in the theatre because there are no performances being performed. This will lead to the town?s people being very angry. Cue for Treason has 3 main types of conflicts Person vs. Nature, Person vs. Person and Person vs. Society. These 3 types of conflicts have made this book very interesting and filled with adventure .Overall Cue for Treason was great book filled with excitement at every chapter. The age group this book is appropriate for is 12-36.This age group is appropriate for this book because the book has somewhat violence, but is appropriate for 12 years and up. In conclusion every story has to have a conflict if it is either big or small. Without a conflict there is no rising action, no climax and no falling action. Conflict is one of the most important parts in a book, and Que for Treason did a great job explain it. Jayson Patel Mrs. ...read more.