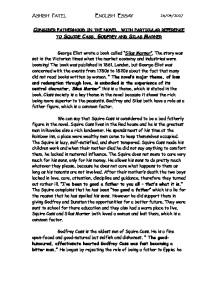 Consider fatherhood in the novel, with particular reference to Squire Cass, Godfrey and Silas Marner

Consider fatherhood in the novel, with particular reference to Squire Cass, Godfrey and Silas Marner George Eliot wrote a book called "Silas Marner". The story was set in the Victorian times when the market economy and industries were booming! The book was published in 1861, London, but George Eliot was concerned with the events from 1780s to 1820s about the fact that many did not read books written by women. " The novel's major theme, of loss and redemption through love, is embodied in the experience of its central character, Silas Marner" this is a theme, which is stated in the book. Class society is a key theme in the novel because it shows the rich being more superior to the peasants. Godfrey and Silas both have a role as a father figure, which is a common factor. We can say that Squire Cass is considered to be a bad fatherly figure in the novel. Squire Cass lives in the Red house and he is the greatest man in Raveloe also a rich landowner. ...read more.

Squire Cass and Silas Marner both loved a woman and lost them, which is a common factor. Godfrey Cass is the eldest son of Squire Cass. He is a fine open-faced and good-natured but selfish and dishonest. " The good-humoured, affectionate hearted Godfrey Cass was fast becoming a bitter man." He began by rejecting the role of being a father to Eppie; he does not let his wife and daughter to live in his home, the Red house. To Godfrey, Molly and his daughter is his deepest and darkest secret. He did not want that baby with Molly instead he wanted to be with Nancy. Godfrey does not let Nancy know of his mistakes about the marriage and daughter because he thinks she will not like him anymore. " Mr Godfrey didn't look half so fresh-coloured and open as he used to do." This phrase shows that he had changed maybe because of the marriage and child. He did not want to get married to Molly but he was blackmailed in to getting married by his brother Dunstan. ...read more.

His friend William Dane betrayed Silas Marner for a theft, which caused him to basically be driven out of his hometown, losing all that he loved. His past was unknown to the villagers of Raveloe so they feared him and treated him as an outcast. Silas was stolen of his wealth but in return he found Eppie sleeping were he had placed his gold. He is a good father as he accepts the child as a gift but Silas Marner is not the natural father of Eppie. "But I've a claim on you, Eppie -- the strongest of all claims." Eppie is the biological child of Godfrey Cass and Molly Farren, Godfrey's secret wife. The gold no longer has its powerful hold on Silas that it used to have. In conclusion, I think that because Godfrey lacked in maternal influence he became a bad father just like Squire Cass. However, Silas Marner is a good father as he accepted the child as a gift but is not the biological father. A good father is open faced, good-natured, honest and not selfish. Fatherhood is more than blood; it is a carefully built relationship that cannot be given or stolen like gold. ...read more.