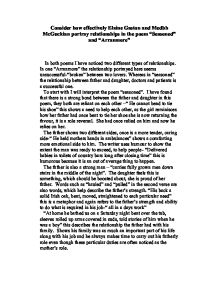 Consider how effectively Elaine Gaston and Medbh McGuckian portray relationships in the poem &quot;Seasoned&quot; and &quot;Arranmore&quot;.

Consider how effectively Elaine Gaston and Medbh McGuckian portray relationships in the poem "Seasoned" and "Arranmore" In both poems I have noticed two different types of relationships. In one "Arranmore" the relationship portrayed here seems unsuccessful-"broken" between two lovers. Whereas in "seasoned" the relationship between father and daughter, doctors and patients is a successful one. To start with I will interpret the poem "seasoned". I have found that there is a strong bond between the father and daughter in this poem, they both are reliant on each other -" He cannot bend to tie his shoe" this shows a need to help each other, as the girl reminisces how her father had once bent to tie her shoe she is now returning the favour, it is a role reversal. She had once relied on him and now he relies on her. The father shows two different sides, once is a more tender, caring side-" He held mothers hands in ambulances" shows a comforting more emotional side to him. ...read more.

"Thousands of people who lent on him, shoulders that carried other people's lives, as well as his own" this shows both sides to him, his strength and ability to help other as well as his caring and considerate side. "He cannot bend to lace his shoe and I have learned to make the loop" this is called a rhyming couplet, shows how the father has left his mark on the daughter. The other poem "Arranmore" starts by describing the collection of seashells, which initially gives the impression of a romantic setting for a couple taking a walk along the beach. In the next line the word "fractured" refers to the state the shells are in, which is a metaphor for the state in which the couples relationship is in- as if something had caused their relationship to drift apart. "There were few so perfect you could say. This would make a perfect setting for a ring" symbolising an engagement, but the fact it says so few to make a setting shows that the relationship is not going to last. ...read more.

"Her gold hair fraying like a night moths wings: the sheep bones blanching on the west most cliffs. In a natural cemetery of stones" - the girls hair fraying could symbolise her being free from the relationship and all that tied her down and the use of the word blanching, meaning white may be to do with renewal as in the relationship has ended which is a good thing. 'Natural cemetery of stones' could be the writer referring to the headstones, which adds to the impression of the relationship being over and dead-'cancered'. In conclusion both poems portray the relationships in hand effectively, but in different ways. 'Arranmore' the theme is more of a romantic story with the use of a more complicated relationship and choice of wording, it contains more metaphors- 'shells' representing the couples broken relationship, because of the shells being 'cancered' or 'fractured'. Whereas the poem "seasoned" uses a more simple text, which I felt is easier to understand and interpret. Such as " at home he bathed us on a Saturday night." Showing the relationship between a daughter and father. By Kirsty Hill ...read more.