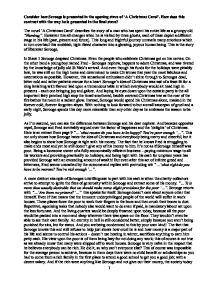 Consider how Scrooge is presented in the opening stave of 'A Christmas Carol'. How does this contrast with the way he is presented in the final stave? The novel 'A Christmas Carol' describes the story of a man who has spent his entire life as a grumpy old "Humbug". However this all changes when he is visited by three ghosts, each of these depict a different stage in his life [past, present and future]. This long and frightful journey unravels many emotions which in turn overhaul this snobbish, tight-fisted character into a glowing, joyous human being. This is the story of Ebenezer Scrooge. In Stave 1 Scrooge despised Christmas. Even the people who celebrate Christmas got on his nerves. On the other hand a young boy named Fred - Scrooges nephew, happens to adore Christmas, and was riveted by the knowledge of jolly old St Nick's arrival. And even though his funds for the holidays were pitiably low, he was still on the high horse and determined to make Christmas that year the most fabulous and ostentatious as possible. However, this sensational enthusiasm didn't shine through to Scrooges dead, bitter cold and rather pathetic excuse for a heart. Scrooge's idea of Christmas was not of a feast fit for a king lavishing with flavour laid upon a tremendous table in which everybody would sit head high in presents - each one bringing joy and galore. And laying its eyes down upon the ecstatic party is the all important fairy perched high atop the tinsel smothered, bauble covered Christmas tree as the roar of the fire bathes the room in a radiant glow. Instead, Scrooge would spend his Christmas alone, masked in the forever cold, forever forgotten abyss. With nothing to look forward to but a small saucepan of gruel and a early night, Scrooge spends this day more miserable than any other day as he embraces the season to be jolly. ...read more.

in fear of insanity seeping into him. However instead of insanity setting in, the ghost Jacob Marley was genuinely visiting the tenacious Scrooge. "...'In life I was your partner, Jacob Marley'..." The words spoken from beyond the grave consume Scrooge and start him of onto the path he should have taken a long time ago. Scrooge is foretold of the three ghosts that await him. "...'Without their visits,' said the ghost, 'you cannot hope to shun the path I tread.'..." We leave this stave with Scrooge in a deep sleep, anticipating his destiny of amendment. The opening to any book is arguably the most important part, as it has to hook the reader with a small section of writing into continuing to read the story and the author hasn't fallen short on this occasion. The book starts strangely with "Marley was dead" which although seems rather bizarre, it grabs the reader's attention and sidetracks their thoughts to trying to understand; who is Marley? How did he die? Why is he dead? What is the relevance of this information? However the fact that someone has died [fictional, but nonetheless] the author is in fret to conjure up a few quirky jokes. "Old Marley was as dead as a door-nail. Mind...A might have been inclined, myself, to regard a coffin-nail as the deadiest piece of ironmongery in the trade. But the wisdom of our ancestors is in the similie; and my unhallowed hands shall not disturb it, or our country's done for. You will then permit me to repeat, emphatically, that Marley was as dead as a door-nail". This is a good example of how Dickens finds humour in even in a persons death - even if the joke isn't really that funny, it still lightens up the mood and by adding this paragraph to the story just emphasised Marley's death so that the appearance of the ghost later on adds a more eerie aura to the epic saga. ...read more.

Oh, glorious! Glorious!" These weather conditions deeply contrast those unambiguously dramatic circumstances revealed in stave 1. "Foggier yet, and colder. Piercing, searching, biting cold. If the good Saint Dunstan had but nipped the Evel Spirit's nose with a touch of such weather as that, instead of using his familiar weapons, then indeed he would have roared to lusty purpose." This is another way in which the author lightens the ambience. "He had a momentary idea of knocking Scrooge down with it, holding him, and calling to the people in the court for help and a strait-waistcoat." That just shows how people genuinely can't believe that Scrooge has changed and that instead he has just gone insane, which was ironically Scrooges thought as he first laid eyes upon the spirit of his former business partner, Jacob Marley. At the end of the novel, Scrooge discovers his new passion for Christmas and understands how his ways of skimping on money and overall cruelty has hauled others around him into a descending spiral of misery. And in utter contrast to his former self - "Scrooge seized the ruler with such energy of action, that the singer fled in terror." into a happy and grateful for everything kind of person - "... 'It's Christmas Day!' said Scrooge to himself. 'I haven't missed it. The Spirits have done it all in one night. They can do anything they like. Of course they can. Of course they can. Hallo, my fine fellow!'...". The novel ends with a perpetual sense of being and archetypal joy. "And so, as Tiny Tim observed, God bless Us, Every One!" In conclusion, I believe this novel was written to not only show the inequality of treatment throughout society - forced labour in work houses for poor, slave wages, but also to show that people like Scrooge are not overly popular and won't live a good life. Moreover, it is never too late to change your ways. "The End" Haroon Dean ?? ?? ?? ?? 1 ...read more.