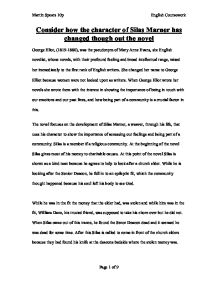 Consider how the character of Silas Marner has changed though out the novel George Eliot, (1819-1880), was the pseudonym of Mary Anne Evans, she English novelist, whose novels, with their profound feeling and broad intellectual range, raised her immediately to the first rank of English writers. She changed her name to George Elliot because women were not looked upon as writers. When George Eliot wrote her novels she wrote them with the interest in showing the importance of being in touch with our emotions and our past lives, and how being part of a community is a crucial factor in this. The novel focuses on the development of Silas Marner, a weaver, through his life, that uses his character to show the importance of accessing our feelings and being part of a community. Silas is a member if a religious community. At the beginning of the novel Silas gives most of his money to charitable causes. At this point of the novel Silas is shown as a kind man because he agrees to help to look after a church elder. While he is looking after the Senior Deacon, he fell in to an epileptic fit, which the community thought happened because his soul left his body to see God. While he was in the fit the money that the elder had, was stolen and while him was in the fit, William Dane, his trusted friend, was supposed to take his chore over but he did not. When Silas came out of this trance, he found the Senor Deacon dead and it seemed he was dead for some time. After this Silas is called to come in front of the church elders because they had found his knife at the deacons bedside where the stolen money was. ...read more.

The villagers also change their point of view of Silas after this incident because they thought that Silas was in league with the Devil but seen as Silas has lost his money they do not believe this because it should not have happened if he was in league with the devil. They see him as "poor, mushed creature". This shows that the villagers do not see him as evil but as human as them and not in league with the devil. After this incident, the villagers start to visit him more often and Silas accepts them to come in to his life. This shows that Silas has started to feel more because he is becoming part of the community. Further, on in the novel, it shows the extent of Silas' despair. He cannot even find comfort in the thought of earning new gold because it will remind him of what he has lost, "Silas himself was feeling the withering desolation of that bereavement." This shows that Silas is feeling grief because he has lost something close to him. The community rally round and try to help Silas, especially Dolly Winthrop. The extent of Silas' grief is emphasised by Elliot's choice of language, she starts using imagery, which emphasises the extent of Silas' grief because we are able to visualise it. When he sees Eppie's hair, he thinks it is his gold, and that it has come back, "Gold-his own gold- brought back to him as mysteriously as it was taken away!" This shows that he thinks that Eppie's hair is his gold. When he goes to touch her hair, he finds out that it is not his gold, "a sleeping child". Once Silas had wakened Eppie, he started to feed her. ...read more.

However, Eppie's reaction to this is, "We've been used to being happy together every day, and knowing him sitting at home, thinking if me and felling lone". This shows that Eppie is not willing to leave Silas just because her blood father just comes along, says come with me, and have a wealthy life. In addition, it shows that Eppie will stand by her father because she loves him very much. Near the end of the novel, Silas is shown that he can trust once again. When Silas and Eppie go to find Lantern Yard, they discover that it has long disappeared and a factory stands in its place. Silas tells Dolly how he will never find out whether his name was cleared, but in a sense this no longer matters to him because he has regained his ability to trust in God and other people, "I think I shall trusten till I die.". This is important because it shows that by Eppie, Silas' feeling have changed from when he first came to Raveloe. They have changed from when he could not trust to now. The novel shows that Silas' feeling change a lot in the novel. At first, he is a very trusting man who believes in God. However, all of this is lost when he is falsely accused of robbery. When he comes to Raveloe, he isolates himself until Eppie comes along and brings him back to life by her learning and her joy. At the end of the novel, we see that Silas is now able to trust people, he believes in God and that he is part of the community. This is what all of George Elliot's books are saying, that we should be part of the community and be in touch with our inner selves. Martin Spears 10p English Coursework Page 1 of 9 ...read more.