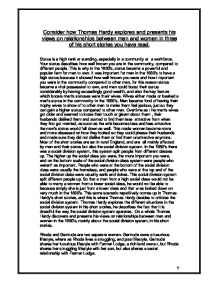 Consider how Thomas Hardy explores and presents his views on relationships between men and women in three of his short stories you have read.

Consider how Thomas Hardy explores and presents his views on relationships between men and women in three of his short stories you have read. Status is a high rank or standing, especially in a community or a workforce. Your status describes how well known you are in the community, compared to different people. This is why in the 1880's, status became a powerful and popular item for men to own. It was important for men in the 1880's to have a high status because it showed how well known you were and how important you were in the community compared to other men, for this reason status became a vital possession to own, and men could boost their status considerably by having exceedingly good wealth, and also the key feature which boosts men's statuses were their wives. Wives either made or beaked a man's status in the community in the 1880's. Men became fond of having their trophy wives to show of to other men to make them feel jealous, just so they can gain a higher status compared to other men. Overtime as the men's wives got older and seemed to loose their touch or gleam about them, their husbands disliked them and started to find them less attractive from when they first got married, as soon as the wife becomes less and less attractive the man's status would fall down as well. This made women become more and more obsessed on how they looked so they could please their husbands and made sure they did not dislike them or find them unattractive anymore. ...read more.

Also their relationship still remains symbolic because farmer lodge is cold to Gertrude, just because she is loosing her appearance in her and that she is not like she used to be. The word cold and alone makes the impression that Gertrude is separated, these two words also give the effect that Gertrude is removed from the relationship between her and farmer lodge. Thomas hardy is trying to show that the relationship between Gertrude and farmer lodge is failing because farmer lodge is starting to be cold towards Gertrude which forces Gertrude to do things alone. Thomas hardy is putting the idea across that farmer lodge is losing interest in his relationship between him and Gertrude, because she has started to lose her touch and appearance that she once used to own. Gertrude brings back many remedies for her arm, farmer lodge notices that Gertrude has brought these remedies and accuses her of bringing back witch mixtures/poisons. "Poison yourself with these apothecary messes and witch mixtures". Gertrude starts to feel that she is forcing farmer lodge to dislike her even more, and she tries everything to get her man back, in this case she tried to look sad and heart swollen. "Sad, soft glance upon him". This trick that Gertrude played changes farmer lodge's attitude towards her, and he starts to feel sympathetic towards her. The use of sad and soft glance emphasises sweetness and sadness at the same time, it creates the impression that Gertrude is now sad but at the time she is also trying to be sweet. ...read more.

Sam and Sophy, but decreases the relationship between Sophy and Randolph by Sam's observations. The language of the word "child" refers Randolph not being a child but acting like one, the word "child" emphasises that Randolph is misbehaving badly like a child on purpose, and this way we think Randolph is starting to act mischievous towards Sophy even though she is not referred to being called a child. All of the three short stories I have analysed each have something common, and that is the relationships between men and the women in the three short stories that I have read. The three short stories all compare what men expected form women and what women wanted from their men. The stories all share the same background of how the relationships between men and women where. I believe that Thomas hardy has represented his views and his opinions on the relationships of men and women very well. He has described three situations/scenarios, of where men and women both had expectations for what they did for each other based on their relationships, Thomas hardy described and handled these scenarios well and presented his ideas in a sensible and easy to understand fashion. Since I have read those three short stories based on relationships, I have realised that I can notice a difference in society from then and until now. I can notice the differences mainly because in our society we do not base each other as much on our class, by the relationship you may be having with some one. ?? ?? ?? ?? 1 ...read more.