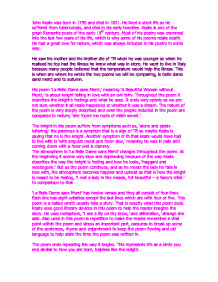 John Keats was born in 1795 and died in 1821. He lived a short life as he suffered from tuberculosis, and died in his early twenties. Keats is one of the great Romantic poets of the early 19th century. Most of his poetry was crammed into the last few years of his life, which is why some of his poems relate death. He had a great love for nature, which was always included in his poetry in some way. He saw his mother and his brother die of TB when he was younger so when he realised he too had the illness he knew what was in store. He went to live in Italy because many people believed that the temperature would help the illness. This is when are where he wrote the two poems we will be comparing, le belle dams sand merci and to autumn. His poem 'La Belle Dams sans Merci,' meaning 'A Beautiful Woman without Merci,' is about knight falling in love with an evil fairy. ...read more.

That is exactly what this poem does. Keats uses good literary devices in this poem to help the reader imagine the story. He uses metaphors, 'I see a lily on thy brow,' and alliteration, 'strange she said. Also used in this poem is repetition to make the reader remember a vital point within the poem and stress an important part, caesuras to break up some of the sentences, rhyme and enjambment to keep the poem flowing and old language to help state the time the poem was written in. The poem ends repeating the way it begins. This represents life as a circle you end similar to how you are born, helpless like the knight. The style of this poem is romantic and it contains classic elements such as medieval subject matter, 'knight-at-arms,' beauty, emotion, sensuality, 'I love thee true!' and archaic, simple language, 'sojourn.' This is opposite style to 'To Autumn' because it tells more of a story and the language is simpler than in the other poem, it also does not have a romantic style. ...read more.

Because Keats had a fatal illness he had to go through his stages of life more quickly than most. At 24 he was middle aged. At the end of the poem Keats talks about, ' gathering swallows' swallows come back every summer after migrating so this may illustrate Keats opinion of life. Maybe he is saying people and reincarnated. It was the last poem he wrote which tells us he ended on a happy note and had come to terms with his illness and death. 'to Autumn,' is set in late September/ early October and is a reflection of the season's beauty and nature is at its peak, warm and rich with a sense of achievement, whereas 'La Belle Dame sans Merci' is set in the late autumn/early winter where the air is full of decay and negativity and nature seems cold and unwelcoming. 'To Autumn' has a happy yet reminiscing atmosphere, as it is what Keats thinks and misses about autumn. The poem also comes across as a tranquil atmosphere which is opposite to 'La Belle Dame sans Merci.' I think these two poems have many similarities, but also many differences. ...read more.