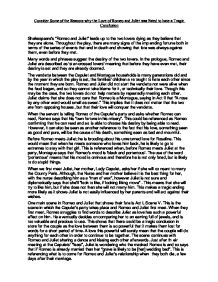 Consider Some of the Reasons why the Love of Romeo and Juliet was Fated to have a Tragic Conclusion Shakespeare's "Romeo and Juliet" leads up to the two lovers dying as they believe that they are alone. Throughout the play, there are many signs of the impending fortune both in terms of the series of events that end in death and showing that fate was always against them, even before they met. Many words and phrases suggest the destiny of the two lovers. In the prologue, Romeo and Juliet are described as 'star-crossed lovers' meaning that before they have even met, their destiny is set and they are already doomed. The vendetta between the Capulet and Montague households is many generations old and by the year in which the play is set, the families' children are taught to hate each other since the moment they are born. Romeo and Juliet did not start the vendetta nor were alive when the feud began, and so they cannot take blame for it, or technically their love. Though this may be the case, the two lovers do not help matters by repeatedly meeting each other. Juliet claims that she does not care that Romeo is a Montague, saying in Act II that "A rose by any other word would smell as sweet." ...read more.

We first meet Friar Lawrence the morning after the feast, when Romeo is still elated by meeting his love. Friar Lawrence is, as well as monk, a herbologist making him good with making potions. This means that when Juliet is in need of a solution, she believes that the Friar is possibly the best person to ask as he may have a solution. Romeo asks the Friar to marry him and Juliet, something that he is initially against. However, when he realises it may heal the wound between the two families, he agrees. This decision may have made their love come to a premature end as it shows how quick they were getting married, and if perhaps they had prolonged their courtship, the tragic set of events may not of being put to play. During the wedding of the two lovers, Friar Lawrence calls Death 'love-devouring'. The word 'devouring' implies two things: that death can happen even when someone is extremely happy and in love; and that death can eat away two people's love for each other. When Juliet enters the scene, her and Romeo enter a kiss so passionate that the Friar believes he cannot leave them alone until they are married in case they have other intentions. ...read more.

When he tells Friar Lawrence, he is not anxious about what might happen but instead asks John to get a crowbar so that he may break into the vault and hide Juliet in his cell. However, Balthasar, one of the Montague's servants, delivers the news of Juliet's death to Romeo and Romeo manages, by bribing a poverty-stricken apothecary, to obtain a fatal poison. Fate is shown multiple times during those scenes, with Friar John being quarantined so he could not deliver the letter and Romeo managing to bribe the apothecary. By this point, the fortune of Romeo and Juliet is almost set in stone as Romeo has now obtained the poison, with the only hope of happiness being from Friar Lawrence finding Romeo or Juliet awakening before Romeo takes the poison. The final scene takes place in the graveyard where the Capulet's sepulchre is located. Paris is already in the graveyard when the scene opens, covering the vault in flowers. When Romeo arrives, Paris begins to fight him, sealing Paris' destiny. Romeo once again shows his sword skill and slays Paris. Romeo then goes down into the vault and sees Juliet's lifeless body. The body is described as "crimson" which would imply that the Juliet's 42 hours of death-like symptoms are beginning to wear off. Romeo then takes the poison, killing himself so that he can be with Juliet. When Juliet awakens, she finds Romeo dead on top of her and so kills herself also. ...read more.