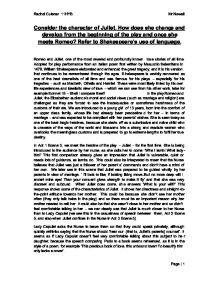 Consider the character of Juliet. How does she change and develop from the beginning of the play and once she meets Romeo? Refer to Shakespeare's use of language

Consider the character of Juliet. How does she change and develop from the beginning of the play and once she meets Romeo? Refer to Shakespeare's use of language. Romeo and Juliet, one of the most revered and profoundly known love stories of all time. Adopted for play performance from an Italian poem first written by Masuccio Salernitano in 1476, William Shakespeare elaborated and enhanced the great tragedy; and it is his version that continues to be remembered through the ages. Shakespeare is worldly renowned as one of the best dramatists of all time and was famous for his plays - especially for his tragedies - such as Macbeth, Othello and Hamlet. These were most likely tinted by his own life experiences and idealistic view of love - which we can see from his other work, take for example Sonnet 18 - Shall I compare thee? In the play Romeo and Juliet, the Elizabethan audience's moral and social views (such as marriage and religion) are challenged as they are forced to see the inadequacies or sometimes harshness of the customs of their era. We are introduced to a young girl of 13 years, born into the comfort of an upper class family, whose life had already been predestined for her - in terms of marriage - and was expected to be compliant with her parents' wishes. She is seen today as one of the best tragic heroines, because she starts off as a submissive and naive child who is unaware of the ways of the world and blossoms into a strong and resolute woman who overlooks the meaningless customs and is prepared to go to extreme lengths to fulfil her true destiny. In Act 1 Scene 3, we meet the heroine of the play - Juliet - for the first time. She is being introduced to the audience by her nurse, as she calls her to come: 'What lamb! ...read more.

She develops from her simplistic sentences, to sophisticated ones that contain double meanings and creative imagery. Romeo greets her with a bout of flattery, by introducing himself as a pilgrim approaching her, and metaphorically naming Juliet as a 'holy shrine', and then he suggests that they kiss. Love poetry of this era, usually identified the woman as a "saint, angel or goddess, whom the male suitor approaches with expression of his unworthiness and undeserving" (www.shakespeare-online.com/playanalysis). By involving religion into his greeting he infers that his love for her is pure and untainted. Juliet follows on from his imagery of saints and religion, and pretends to be the saint, although she modestly refuses his kiss - using a pun on palmers, 'I...palm to palm is holy palmers' kiss' - by saying that religious piety is contented by the touching of a statue of a saint, and also with hands clasped in prayer. This shows how Juliet has taken into effect the double meanings now that she has met Romeo. The appreciation of double meanings allows her to tease and flirt with Romeo and also express her love for him. After another attempt at Romeo trying to get a kiss from her, Juliet refuses deftly once more, still playing on the religious imagery saying 'lips they must use in prayer'. The touching of hands and lips shows that Shakespeare refers to the body quite a lot and so doesn't reduce Romeo and Juliet's love just to physical attraction. It is a much deeper and intimate relationship that they have already established within only a few lines being exchanged. This quickness and adeptness in speech to come up with a witty response for Romeo, has 'kept her on her toes', a skill which she will need later on to cope with the challenges she will face later on because of her love for Romeo. From their very first meeting she has developed her language. ...read more.

"O gentle/Romeo if thou dost love pronounce it faithfully" This shows that Juliet doesn't want Romeo's fanciful, elaborated oath she would rather he spoke it plainly. After they confess their love to each other, another Juliet's language changes once again. It becomes filled with metaphors and emotive language, just like Romeo's. She also speaks of characters from Greek mythology which shows her to have more worldly knowledge than her mother and nurse think. She says Romeo is her 'tassel-gentle' which she wishes could call back if she had a 'falconer's voice' (line 161-62). Juliet also seems to have a new view of her surroundings. Girls in the Elizabethan era wouldn't leave home until they were married, but Juliet now views her home as some kind of prison as she states 'Bondage is hoarse, and may not speak aloud'. She can not talk loudly to Romeo because she is trapped in her own home, and this could also be viewed symbolically for the restraints of the couple. Her house (family and stature) are trapping her from being with Romeo, because he is a Montague, and she can not voice her opinions blatantly. Another example of Juliet's language becoming richer, from the balcony meeting is when she describes the spoiled child with a pet bird. 'That lets it hop a little from his hand/Like a poor prisoner in his twisted gives/And with a silken thread plucks it back again/So loving-jealous of his liberty'. These metaphors were not apparent in Juliet's language until after she meets Romeo. In conclusion, Juliet's character developed drastically from the beginning of the play until after she meets Romeo, and Shakespeare used her youthful innocence and naivety as a backdrop for which the story's underlying themes of overpowering love and fate can unfold. Romeo and Juliet uses intense moments of dramatic suspense in which we see a young girl blossom into a strong and resolute woman who succeeds in her quest for love. ?? ?? ?? ?? Rachel Cutenar 11HYB Mr Newall Page | 1 ...read more.