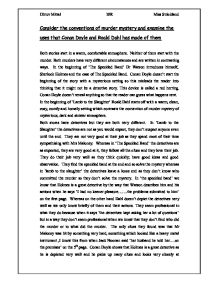 Consider the conventions of murder mystery and examine the uses that Conan Doyle and Roald Dahl has made of them Both stories start in a warm, comfortable atmosphere. Neither of them start with the murder. Both murders have very different circumstances and are written in contrasting ways. In the beginning of 'The Speckled Band' Dr Watson introduces himself, Sherlock Holmes and the case of The Speckled Band. Conan Doyle doesn't start the beginning of the story with a mysterious setting so this misleads the reader into thinking that it might not be a detective story. This device is called a red herring. Conan Doyle doesn't reveal anything so that the reader can guess what happens next. In the beginning of 'Lamb to the Slaughter' Roald Dahl starts off with a warm, clean, cosy, comfy and homely setting which contrasts the convention of murder mystery of mysterious, dark and sinister atmosphere. Both stores have detectives but they are both very different. In 'Lamb to the Slaughter' the detectives are not as you would expect, they don't suspect anyone even until the end. They are not very good at their job as they spend most of their time sympathising with Mrs Maloney. Whereas in 'The Speckled Band' the detectives are as expected, they are very good at it, they follow all the clues and they love their job. ...read more.

He finds a dog lead that has a small loop not big enough for a dog and a safe in Dr Roylott's room. He also finds a small shed far away from the house from where you can see the window of the room of where the murder took place. There is a presentation of evil in both stories but in 'lamb to the slaughter' there is a lot and is quite obvious. There are evil intentions right from the beginning as when it says 'the eyes...seemed larger and darker than before' this shows that she has some evil intentions from the start. When it says her eyes seemed larger, this shows that she is more awake, more aware, and more conscious. Her eyes seemed darker than before, this shows that she has something on her mind, something bad, evil and something that is troubling her. It is as if she has planned an evil deed and will perform it when she thinks it is the right time. The scene of the murder is a clean, comfy, cosy and warm house which is unusual. The murder happens when Mr Maloney tells Mrs Maloney something that is not told to the reader and is kept secret so she gets angry and so kills him by hitting him by a leg of lamb. Mrs Maloney sees her husband fall to the ground. ...read more.

Mary Maloney isn't a suspect as they sympathise with her as she has lost her husband. She is closed on innocent and therefore there are now no suspects leaving a lose end. Dr Roylott becomes a suspect as he is described as 'the terror of the village' this makes him sound very powerful and scary. He also has a bad-temper and is very strong as he shows this when he storms into Holmes' house and bends an iron bar. The gypsies also become suspects as they are not in control and therefore they could do anything. The free roaming Indian animals are also seen as dangers but not suspects as they are not people. The conclusion of 'lamb to the slaughter' is that Mary Maloney is not a suspect and that whoever murdered Mr Maloney has got away. There are not any evidences. In 'the speckled band' the conclusion is that the snake was the culprit. Holmes indirectly killed Dr Roylott. The main conventions of murder mystery that were used were red herrings as the speckled band was a red herring as it mislead the reader into thinking it was a person or a group of people. They also used many loose ends and use contrasting backgrounds and atmospheres. ?? ?? ?? ?? Dhruv Mittal 10R Miss Strickland ...read more.