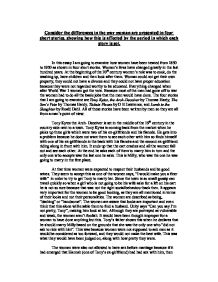 Consider the differences in the way woman are presented in four short stories, showing how this is affected by the period in which each story is set.

Consider the differences in the way woman are presented in four short stories, showing how this is affected by the period in which each story is set. In this essay I am going to examine how women have been treated from 1850 to 1950 as shown in four short stories. Women's lives have changed greatly in the last hundred years. At the beginning of the 20th century women's role was to cook, do the washing up, have children and then look after them. Woman could not get their own property, they could not have a divorce and they could not have proper education because they were not regarded worthy to be educated. Everything changed when after World War 1 women got the vote. Because most of the men had gone off to war the women had to do all the basic jobs that the men would have done. The four stories that I am going to examine are Tony Kytes, the Arch-Deceiver by Thomas Hardy, The Son's Veto by Thomas Hardy, Tickets Please by D H Lawrence, and Lamb to the Slaughter by Roald Dahl. All of these stories have been written by men so they are all from a man's point of view. Tony Kytes the Arch- Deceiver is set in the middle of the 19th century in the country side next to a town. Tony Kytes is coming back from the market when he picks up three girls which were two of his ex-girlfriends and his fianc�e. He gets into a problem because he does not want them to see each other with him so finds himself with one of his ex-girlfriends in the back with his fianc�e and the second ex-girlfriend riding along in front with him. It ends up that the cart crashes and all the women fall out and see each other. At the end he asks each of them to marry him in turn and the only one who accepts was the last one he asks. ...read more.

The tramline that the women worked on in this story was the one that took coal miners from the town to the mines and then back again when work had finished. The trams were very dangerous and that made every one very jumpy because they never knew when the thing would derail or catch on fire. This gives the atmosphere of nervousness and excitement in the tram. The main male character in the story was John Thomas who would go around and have his way with most of the women conductors. He was not crippled or too old to go to war but his job was thought of as too important as he was the head inspector. Annie falls in love with him thinking that he would have changed for her, but he dumps her like he did for all the other girls. But this time the girls get their own back on him by beating him up. The reason why the women where working on the tramline was because the men were away at war . They had been given freedom and power which gave them confidence in what they do which they did not have much off before the war. The women had to struggle for the write to vote before the war had started. The women were beginning to believe that they were equal to men, and therefore were no longer acting in such a gentle and soft manner. The women working on the tram stick together because they need to in case one of them get in trouble with the men from the mine. John Thomas likes the right to choose between lots of willing women. He was able to do this because almost all of the young men had gone off to fight in the war. Since the women were working on the trams now they were not wearing the long flowing dresses, but instead wore "ugly blue uniform" and "skirts up to their knees" which 20 years ago would have been totally inappropriate. ...read more.

In comparison all four stories are set over a 100 year time period, from 1850 to 1950. Women's position over the hundred years changed greatly from Tony Kytes the Arch- Deceiver where the women do what they are told to in Lamb to the Slaughter where the woman killed her husband. In Tickets Please and Lamb to The Slaughter the women are underestimated because in both stories the men are attacked and hurt badly if not even killed. Also the women are underestimated because they are not expected to do anything like the sort of thing that they did at the end. In The Sons Veto and in Lamb to the Slaughter the women both wait at home for the man to come home and when he did get home the women would act like servants to them by making them food and drinks. In Tony Kytes the Arch- Deceiver the women in it take what's given to them but in Tickets Please they show him their dislike of what he was doing and they express this in the way in which they beat him up. When they beat him up they act together and not in competition with each other. The women are portrayed as being more independent in the later stories which reflects on the changing status of women in society. Unlike the women in Tony Kytes, who are in competition with each other and will take what Tony dishes out to them, but the women in Tickets Please do not except that the man thinks that he can do what he wants. In conclusion the women in these four stories are treated with either no respect or just regarded as second class citizens. The men in these stories all would treat the women with no respect and the women were under estimated, which came in useful for some of them. The story which I liked the most was the Lamb to the Slaughter because I like the twist at the end of the story when she persuades them to eat the evidence and then goes off giggling. George Martin ...read more.