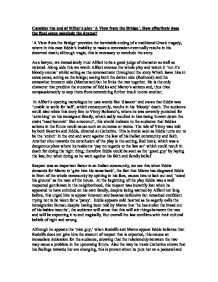 Consider the end of Millers play A View from the Bridge. How effectively does the final scene conclude the drama?

Consider the end of Miller's play 'A View from the Bridge'. How effectively does the final scene conclude the drama? 'A View from the Bridge' provides the inevitable ending of a traditional Greek tragedy, where in this case Eddie's inability to make a concession eventually results in his deserved death; although tragic, this is necessary to conclude the story. As a lawyer, we immediately trust Alfieri to be a good judge of character as well as rational. Along side this we watch Alfieri oversee the whole play and watch it 'run it's b****y course' whilst acting as the commentator throughout the story Which leave him in some sense, acting as the bridge; seeing both the darker side (Redhook) and the somewhat innocent side (Manhattan) but he links the two together. He is the only character that predicts the outcome of Eddies and Marco's actions and, thus tries compassionately to stop them from committing further insult to one another. In Alfieri's opening monologue he uses words like 'disaster' and states that Eddie was 'unable to settle for half', which consequently, results in his 'b****y' death. The audience could also relate this story line to Vinny Bolzano's, where he was severely punished for 'snitching' on his immigrant family, which sadly resulted in him being thrown down the stairs 'head bouncin' like a coconut', this would indicate to the audience that Eddies actions in the future could cause such an outcome or worse. ...read more.

Also the way he treats Catherine shows that his feelings towards her are changing, this is proven when he puts her on a pedestal and says 'you look like the Madonna type; you know with your hair like that' this would be important in the catholic faith. Eddie also gets jealous when Rodolfo dances with Catherine, and symbolically taking her away from Eddie he then appears to 'unconsciously twist the newspaper'. Catherine's naivety allows her to block this out of her mind and thinks it's just Eddie being over protective. When comparing this to his lack of compassion and romance towards Beatrice, he suddenly feels he is 'exposing the issue' and doesn't want to arouse suspicion. On the other hand, at the end of the play Beatrice cradles her dying husband, somewhat like the Pieta in which Mary is cradling Christ, this causes Beatrice to become the 'Madonna type' and back with her husband for his last few moments. Alfieri tried to prevent this, arguing that Eddie should have allowed Catherine and Rodolfo to wed and saying to Eddie that 'When the law is wrong it's because it's unnatural, but in this case it is natural and a river will drown you if you buck it no' he is suggesting that it was Eddie's feeling towards Catherine that were 'unnatural' and goes on to ...read more.

it back at him, thus causing an increase in tension between the two which consequently evolves into a street fight between them. As the fight climax's Eddie pulls out a knife aiming to kill Marco but, ironically, it is his own knife that kills him, this satisfies the audience's expectances and concludes the irony of the play. All along Eddie was setting up his own death and only Alfieri and the audience could see this. Although Eddies death was inevitable and fits in well with the Greek tragedy genre, the slight twist of irony when the audience and Alfieri both know and realize that what happened to Vinny, may just happen to Eddie but on a larger scale, and eventually results in a 'b****y' death of greediness. The tragic ending leaves the audience questioning whether Eddie would have lived if he had 'settled for half', or if he was just genuinely unable to compromise. Alfieri shows some admiration towards Eddie reminding us that his death was useless and that he mourns for him with 'a certain...alarm, here he may be warning the community to become more self aware. He also says that settling for half may not be a bad thing but may just be a brave quality to have, but overall Alfieri feels that the conclusion to Eddie's journey was right and appropriate. ...read more.

Response to Question
Although this question focuses on the end of the play, it would be impossible to discuss whether the final scene is effective in concluding the drama without examining the rest of the play and how different parts ...

Response to Question
Although this question focuses on the end of the play, it would be impossible to discuss whether the final scene is effective in concluding the drama without examining the rest of the play and how different parts of it are dealt with in the climax and close of the play. It is also arguable that as this is a two-act play, the "final scene" essentially covers half of the play, although the exact definition of "scene" could be much narrower and only include the very final part of the play. The candidate's answer is very strong, considering different points in the play and how they are resolved or mirrored at the end of the play and provides a substantial answer to the question.

Level of Analysis
The level of analysis in this essay is very high. The candidate quotes directly from the text to provide evidence and support his/her arguments. However, the candidate then goes on to explain how and why the quote is relevant and supports the point they have made, and this is the key skill needed for high marks, which is demonstrated so well in this essay. Particularly good examples include the fifth paragraph (Although he appears the Ã¢â‚¬Ëœnice guyÃ¢â‚¬â„¢...), and this paragraph is also an example of going beyond the text to reference other works or influences on the writer, in this case the Pieta.

Quality of Writing
Spelling, grammar and punctuation are all of a high standard in this essay. The candidate's quality of written communication is excellent, with the candidate expressing his/her ideas concisely and clearly. Some quotations could be better integrated into sentences so that they flow better, for example "Eddie automatically questions his sexual orientation: Ã¢â‚¬ËœHeÃ¢â‚¬â„¢s like a chorus girlÃ¢â‚¬â„¢ and instantly feeling superior" the colon could be removed and the quotation made more of a part of the sentence. The "instantly feeling superior" is also grammatically wrong - but this is such a minor error that it would not affect the candidate's mark, however, candidates should always proofread work before submitting it, to give off a better overall impression.