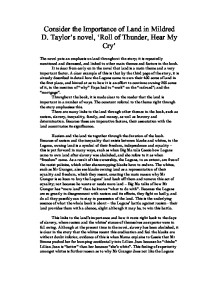 Consider the Importance of Land in Mildred D. Taylor's novel, 'Roll of Thunder, Hear My Cry'

Consider the Importance of Land in Mildred D. Taylor's novel, 'Roll of Thunder, Hear My Cry' The novel puts an emphasis on land throughout the story; it is repeatedly mentioned and discussed, and linked to other main themes and factors in the book. It is clear from early on in the novel that land is a main theme and a very important factor. A clear example of this is that by the third page of the story, it is already described in detail how the Logans came to own their 400 acres of land in the first place, and hinted at as to how it is an effort to continue owning 200 acres of it, in the mention of "why" Papa had to "work" on the "railroad"; and the "mortgage". Throughout the book, it is made clear to the reader that the land is important in a number of ways. The constant referral to the theme right through the story emphasises this. There are many links to the land through other themes in the book, such as r****m, slavery, inequality, family, and money, as well as bravery and determination. Because these are imperative factors, their association with the land accentuates its significance. r****m and the land tie together through the duration of the book. ...read more.

When Mama talks of how the boys' "blood's in" the "land", she refers to how Stacey and his brothers' family bond is like an instinct for them to defend their land, suggesting the land is so important that their very fibres of being are interweaved amongst it. Money is obviously an important aspect in the story too, as if the Logans don't have enough to pay taxes and the mortgage; they're in danger of losing their land, and so effectively losing their freedom too. It is because of the land that the Logans are in a position where they can stand up against r****m in the first place. This is demonstrated when the Logans can afford (just) to shop in Vicksburg, instead of at the Wallace store - this is an act of defiance against r****m, because the Wallaces are especially r****t whites, and so by going out of their way not to shop at their store, they are standing up against them and defying everything that is usual in that r****t environment. The reason the Logans can afford to shop elsewhere, comes back down again to the fact that they have land, and so their profit is entirely theirs and land-owning whites like Mr Granger are without the power to take part of their profits. ...read more.

- that no matter what they do, it is near impossible to ever escape from it. Papa setting his land on fire demonstrated the significance of land in another way too. Near the end of the book, the reader is described to how a "flood" of "men and women", black and white alike work "side by side" in an effort to put out the fire which is destroying the land. This shows that land is so important; it can break the barrier of r****m so that both races will work together to achieve a goal - something that nothing else seemed able to break. Also signifying the importance of land yet again, is at the very end of the book when the reader is told how Cassie "cried" for TJ, and "for the land". Showing that the land is so important to everything, even a nine-year old can comprehend this and cry about it. Studying the book, quotations and evidence from it, it is clear that land is undoubtedly a theme of great importance, possibly the most so out of all the themes in the book, as everything seems to come down or link in some way to the land - slavery, inequality, money, family, bravery - even r****m itself involve the land through some means. It is can safely be assumed, that land is the essence of the story, tying in with all the other factors which Roll Of Thunder, Hear My Cry plays on. Kelly Nash 10P ...read more.