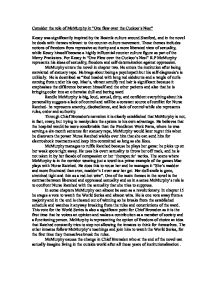 Consider the role of McMurphy in &quot;One flew over theCuckoo's Nest&quot;.

Consider the role of McMurphy in "One flew over the Cuckoo's Nest" Kesey was significantly inspired by the Beatnik culture around Stanford, and in the novel he deals with themes relevant to the counter-culture movement. These themes includes notions of freedom from repressive authority and a more liberated view of sexuality, while Kesey himself became a highly influential counter culture figure as part of the Merry Pranksters. For Kesey in "One Flew over the Cuckoo's Nest" R.P McMurphy represents his ideas of sexuality, freedom and self-determination against oppression. McMurphy enters the novel in chapter two. He enters the institution after being convicted of statuary rape. He brags about being a psychopath but his self-diagnosis's is unlikely. He is described as "Red headed with long red sideburns and a tangle of curls coming from under his cap. ...read more.

McMurphy manages to ruffle Ratched because he plays her game: he picks up on her weak spots right away. He uses his overt sexuality to throw her off track, and he is not taken in by her facade of compassion or her 'therapeutic' tactics. The scene where McMurphy is in the corridor wearing just a towel is a prime example of the games Mac plays with Nurse Ratched. He does this to rouse her and he manages it "She's madder and more frustrated than ever, madder'n I ever saw her get. Her doll smile is gone, stretched tight and thin as a red-hot wire". One of the main themes in the novel is the contrast between liberated and oppressed sexuality and so in a sense McMurphy's role is to confront Nurse Ratched with the sexuality that she tries to suppress. ...read more.

Mac teaches them that they can be functioning members of society on the boat trip when he refuses to help and the inmates learn that they can manage on their own. McMurphy doesn't always take control of the group. After finding out that Nurse Ratched is in control of when he leaves, as he is committed and is also able to give him shock treatments and lobotomies. One of the main themes of the novel and a subject close to Kesey's heart is sexual freedom and this is constantly played upon with the conflict between Nurse Ratched and McMurphy. Harding talks of the lobotomies used by Ratched as "frontal lobe castrations" saying she can use them as castration and suggests that sex can be used against her. This emphasises the role of McMurphy as a sexual liberator. There are many references to Christ and Christianity in the novel, most of these concerning McMurphy. I don't believe that Kesey portrays Mac to be Christ but perhaps some kind of Christ figure. ...read more.