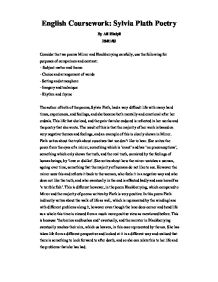 Consider the two poems Mirror and Blackberrying carefully, use the following for purposes of comparison and contrast

English Coursework: Sylvia Plath Poetry By Ali Hlaiyil 28/01/03 Consider the two poems Mirror and Blackberrying carefully, use the following for purposes of comparison and contrast: - Subject matter and theme - Choice and arrangement of words - Setting and atmosphere - Imagery and technique - Rhythm and rhyme The author of both of the poems, Sylvia Plath, had a very difficult life with many hard times, experiences, and feelings, and she became both mentally and emotional after her ordeals. This life that she lead, and the pain that she endured is reflected in her works and the poetry that she wrote. The result of this is that the majority of her work is based on very negative themes and feelings, and an example of this is clearly shown in Mirror. Plath writes about the truth about ourselves that we don't like to hear. She writes the poem from the eyes of a mirror, something which is 'exact' and has 'no preconceptions', something which only shows the truth, and the real truth, unmisted by the feelings of human beings, by 'love or dislike'. She writes about how the mirror watches a woman, ageing over time, something that the majority of humans do not like to see. ...read more.

In both the poems Plath writes about the walk of life and the journey that we all go through, this is split into different parts in the different stanzas of the poems. However, although this makes the poems similar the walks of life that are described are different. In Mirror this is shown in the more physical literal sense, where the disadvantages and problems can be seen as the woman watches herself slowly age over time. The mirror reflects this to her and shows her what is happening, and how in it 'she has drowned a young girl' and how 'an old woman rises'. However, in Blackberrying, although we get a clear picture that the person in the poem is walking down a path with bushes and blackberries on the sides this is only a physical walk down the path, and not a physical walk through life like in Mirror, where the woman is actually ageing and physically getting older. The actual walk of life described in Blackberrying is a spiritual walk for the person in the poem, as she admires the nature around her, compares it to life and then reflects on her life. ...read more.

Throughout both of them however is the journey of life and she gradually gets older until she is an old woman at the end. She uses enjambment to make the poem flow more to become more like a storyline - in order for the reader to get into it more and relate to it more themselves. She has also used repetition in line nine where she says 'over and over' showing how many times the woman has come to the mirror. This also shows that the mirror has been with the woman since she was young due to it seeing her so many times. Blackberrying has been split into 3 separate stanzas, each indirectly showing a stage in the woman's life. Plath has again used enjambment to add affect to the poem and make it flow. Repetition is used several times throughout the poem, on the first line the repetition of 'nothing' emphasizes just how many blackberries there are in the lane. Also on line twelve where 'protesting' is repeated, and lines twenty-five and twenty-seven where 'nothing' and 'beating' are repeated the same affect is achieved. She also uses alliteration alongside the already use of enjambment to emphasize on a certain point and make the poem flow even more, this is shown in line sixteen where she says 'bluegreen bellies' when referring to the bush of flies. ...read more.