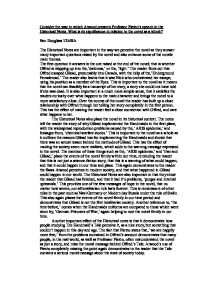 Consider the way in which Atwood presents Professor Piexto's speech in the Historical Notes. What is its significance in relation to the novel as a whole?

Consider the way in which Atwood presents Professor Piexto's speech in the Historical Notes. What is its significance in relation to the novel as a whole? Ben Douglass 12MRA The Historical Notes are important in the way we perceive the novel as they answer many important questions raised by the novel and also enhance some of the novels main themes. The first question it answers is the one raised at the end of the novel; that is whether Offred is stepping up into the,'darkness,' or the, 'light.' The reader finds out that Offred escaped Gilead, presumably into Canada, with the help of the,'Underground Femaleroad.' The reader also learns that it was Nick who orchestrated her escape, using his position as a member of the Eyes. This is important to the novel as it means that the novel can feasibly be a transcript of her story, a story she could not have told if she was dead. ...read more.

The Historical Notes are also important in that they show the reader that Gilead has finished, and that it had it's problems, 'purges and internal upheavals.' This provides one of the few messages of hope in the novel, that no matter how severe, not all totalitarian rule lasts forever. This is reminiscent of other rules in the past such as Nazi Germany or Modern day Russia under the rule of Stalin. This also again places the events of the novel firmly in our time period and demonstrates that Gilead is not the first totalitarian society. Another reference to, 'the time before,' comes when the Handmaids uniforms are compared to those which were worn by, 'German Prisoners of War,' again helping to root the novel firmly in our time. Another important effect of the Historical notes is that it demonstrates how people studying The Handmaid's Tale perceive it, as a nice story, but something that couldn't happen in this day and age. ...read more.

The reader learns that the text was originally found in tape format, and made into a text by Professor Piexto and his associates. The fact that Piexto criticizes Offred for her account, 'she does not see fit to supply us with her original name,' demonstrates his misunderstanding of the account, that Piexto sees it purely in the context of what he can learn from it about Gilead, and does not seem to care for Offred's, 'whiff of emotion,' or what Offred seems to have suffered through. The fact that Piexto's lecture is based on ,' Problems of Authentication,' again shows a complete disregard for what Offred went through, and again demonstrates his misunderstanding of the entire Tale. Atwood uses Piexto's misunderstanding to again make a warning to society; again that what happens in the novel could happen again. This could again be a comment on society and university education by Atwood; that everyone is so concerned with facts, figures and dates, they often forget, 'the human heart.' ...read more.