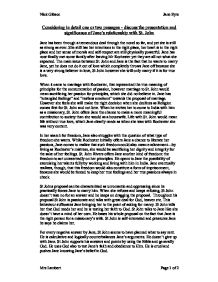 Considering in detail one or two passages - discuss the presentation and significance of Jane's relationship with St. John Jane has been through a tremendous deal through the novel so far, and yet she is still as strong as ever. She still has her intentions in the right place, her heart is in the right place and her sense of morals and self-respect are still physically powerful. Jane has now finally met some family after leaving Mr Rochester yet they are all not what she expected. The main issue between St. John and Jane is the fact that he wants to marry Jane, yet he does not do it out of love which completely throws Jane off because she is a very strong believer in love, St John however she will only marry if it is for true love. When it came to marriage with Rochester, that represented the true meaning of principles for the consummation of passion, however marriage to St. John would mean sacrificing her passion for principles, which she did not believe in. Jane has "entangled feelings" and "restless emotions" towards the proposal of marriage. ...read more.

He bases his whole proposal on the fact that Jane is the right person for a missionary's wife. St John is self-interested and pressures Jane he says he claims her. For every negative answer by Jane, St John seems to have planned what to say next. He is calculative and logically counterbalances Jane's arguments. He doesn't give up with Jane. St John supports his answers and points by using the Bible and generally God. He uses God also to test Jane's faith and obedience to Him. He is cruel and pushes Jane knowing Jane's belief in God. St John has been observing and studying Jane to see if she is right for the job and has planned everything from the very beginning. St John uses emotional blackmail that tortures Jane mentally. He wants to marry Jane so he can influence her life till her death. The whole thing is a matter of control. The more he speaks the more Jane feels his influence on her. She feels like she cant do anything to escape. St John is arrogant; he strongly believes Jane should become a part of him. This is what he wants and this is how he wants it. ...read more.

Charlotte is showing us how much Jane has grown with the past experience of Mr Rochester and how that she will only marry for true love and she has learned not to trust so easily. When St John finally takes the hint that she will not marry him she wishes "he had knocked me down instead" because she would hate to loose another family member when she had just found one. She does not want to hurt his feelings that badly yet on the other hand she must otherwise he will persist until she accepts. In conclusion the main significance of this part is to show how far Jane has come in terms of growing up and realising what is right and what she wants for herself. She has learnt that she should put herself first when it comes to marriage and things, which concern her majorly. It also shows how the relationship between St John and Jane is a distant one due to their conflict of interests. However I feel that the main point is to show how far Jane has become and how much she has learnt from her previous encounters. ?? ?? ?? ?? Nick Gibson Jane Eyre Mrs Lambert Page 1 of 2 ...read more.