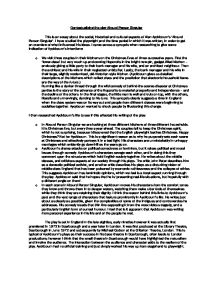 Contextualising the play Absurd Person SIngular This is an essay about the social, historical and cultural aspects of Alan Ayckbourn's 'Absurd Person Singular'. I have studied the playwright and the time period in which it was written, in order to get an overview of what influenced his ideas. I came across a synopsis when researching to give some indication of Ayckbourn's intentions: o We visit three couples in their kitchens on the Christmas Eves of three successive years. First the 'lower-class' but very much up-and-coming Hopcrofts in the bright new-pin, gadget-filled kitchen - anxiously giving a little party to their bank manager and his wife, and an architect neighbour. Then the architect and his wife in their neglected untidy flat. Lastly, the bank manager and his wife in their large, slightly modernised, old-Victorian style kitchen. (Ayckbourn gives us detailed descriptions of the kitchens which reflect class and the prediction that electronic household items are the way of the future.) Running like a darker thread through the wild comedy of behind-the-scenes disaster at Christmas parties is the story of the advance of the Hopcrofts to material prosperity and independence - and the decline of the others. In the final stages, the little man is well and truly on top, with the others, literally and unnervingly, dancing to his tune. This synopsis clearly suggests a time in England when the class system was on its way out and people from different classes were beginning to socialise together. ...read more.

I feel that is it apparent that Ayckbourn was writing from personal experience in his life and of the people he met. The play is set in England in the late eighties, early nineties however it was actually first premiered in 1972 in Scarborough and a year later in London. It was first produced at the Library Theatre, Scarborough in June 1972 and subsequently by Micheal Codron at the Criterion Theatre, London. This is typical of Ayckbourn's plays as their success in his base theatre in Scarborough, often leads to London productions; however I think that the small theatre in Scarborough would have highlighted the naturalism and involve the audience. The interaction between the audience and character adds to the realism of the play. Ayckbourn had no official training and just simply worked his way up from stagehand to playwright. Ayckbourn discovered that he could write effectively about 'normal' situations, instead of trying to be different. To find out what could have initiated his ideas at the time, I researched any important events that occurred around the time it was written. o Similarly to the 60's people were still quite open about sex, throughout the restoration period relationships between sexes was finally allowed to be explored by men and women on stage. So we also see a lot of sexual innuendo for instance the men talking about Lotties legs. ...read more.

Ayckbourn wanted to create a feeling of intimacy and involvement. The Scarborough theatre is a smaller environment and in the round which helps him bring the characters and audience together which also allows him to create realistic and believable characters. In a play like Absurd Person Singular the focus is the characters, Ayckbourn stated that his plays are about the people, not places. The natural and simple sets that he uses allow the focus to be entirely on the characters which also allows the audience to relate to the characters. It is obvious that Ayckbourn is particularly focused on the reality of performance, as he explained that he gets pleasure so much from theatre because it has challenges which television doesn't. In Absurd Person Singular I feel that Ayckbourn is showing how misinterpreted a religious festival such as Christmas can be. He portrays the reality that lies behind closed doors and represents Christmas as he feels it will be in a decade's time. There is no longer a religious issue behind Christmas as people are simply materialistic. He says that he hopes he is presenting real-life situations, but with a diverse perspective on them, which I think he successfully does as he simply presents he reality behind closed doors. Ayckbourn's plays are as influential as is his capability to scrutinize predictable, everyday middle class people, and nevertheless to truthfully identify their fight to uphold these idyllic lives, at the same time as clearly living the conflict and situations that so many have to face. ...read more.