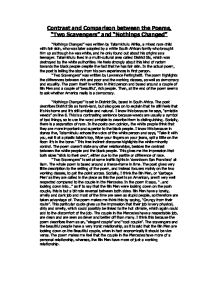 Contrast and Comparison between the Poems, "Two Scavengers" and "Nothings Changed" "Nothings Changed" was written by Tatamkhulu Afrika, a mixed race child with fair skin, who was later adopted by a white South African family who brought him up as though he was white, and he only found out about his origins as a teenager. Tatamkhulu lived in a multi-cultural area called District Six, which was destroyed by the white authorities. He feels strongly about this kind of r****m towards the black people despite the fact that he has fair skin. In the actual poem, the poet is telling the story from his own experiences in first person. "Two Scavengers" was written by Lawrence Ferlinghetti. The poem highlights the differences between rich and poor and the working classes, as well as democracy and equality. The poem itself is written in third person and based around a couple of Bin Men and a couple of 'beautiful', rich people. Then, at the end of the poem seems to ask whether America really is a democracy. "Nothings Changed" is set in District Six, based in South Africa. The poet describes District Six as harsh-land, but also goes on to explain that he still feels that it's his home and it's still amiable and natural. I know this because he says, "amiable weeds" on line 8. This is a contrasting sentence because weeds are usually a symbol of bad things, so to use the word amiable to describe them is distinguishing. Socially, there is a separation of race. ...read more.

The black people cannot do the same things as the white people, who seem to be better off money-wise, or at least not in the same way. We are shown this when the poet describes the contrast between the 'whites only inn' and the 'working man's caf�'. The ideas in "Two Scavengers" are to do with the extreme divisions between rich people and poor people in a supposedly egalitarian society, and the effect these divisions have on how people perceived each other. "...the two scavengers up since four am / grungy from their route," this quote encourages us to sympathise with these Bin Men who work anti social hours and who become dirty and smelly as a result. The specific detail (4 am) and the word 'grungy' makes us pity them. The quote, "...the cool couple," does not describe the pair in as much detail as the Bin Men, as the poet is less interested in them. He uses a clich� in this sentence, the cool couple, which is probably what they think of themselves. And finally, the quote, "as if anything at all were possible / between them..." makes me think that the poet would like to believe that the two pairs he describes really could be friends - but the 'as if' tells us he knows that is only imaginary and would probably never happen. He feels that democracy hasn't succeeded because communication between the rich and poor is still impossible. The tone of voice in "Two Scavengers" is that the poet is more on the side of the Bin Men, and is less interested in the "cool couples" side. ...read more.

"Nothings Changed" is set out in six stanzas, each of eight fairly short lines. This kind of regularity in the layout creates a sense of control and shows us that the poet is very clear about what he is feeling. But, within that pattern, the length of the sentences varies from a whole stanza to just two words. To create impact and effect he also uses short harsh lines and words, such as, "It's in the bone" and "small round hard stones click." Ferlinghetti uses repetition in his poem. Individual words are repeated, for instance, "elegant" (lines 8 and 9) and "scavengers" (lines 16 and 26) as well as phrases such as "as if" (lines 29 and 33). In conclusion, "Nothings Changed" and "Two Scavengers" both examine the differences between American democracy and the South African democracy. The poetic devices used are similar in both pieces but both have very different effects on the reader. I found that he way Tatamkhula Afrika structured his poem with short harsh lines was effective because it made things stand out and got the point across quicker. It also gave us a better idea of how the poet is feeling. I also liked the way he wrote the poem in the present tense like he was reliving the experience. In "Two Scavengers", I like the way Ferlinghetti laid out his poem and still made it coordinate with meaning of the poem. And also, the way he started a new line when there was a pause in the speech I found very effective and unlike many other poems. ?? ?? ?? ?? ...read more.