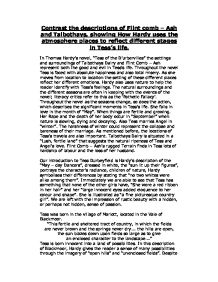 Contrast the descriptions of Flint comb - Ash and Talbothays, showing How Hardy uses the atmosphere places to reflect different stages in Tess's life.

Contrast the descriptions of Flint comb - Ash and Talbothays, showing How Hardy uses the atmosphere places to reflect different stages in Tess's life. In Thomas Hardy's novel, "Tess of the D'urbervilles" the settings and surroundings of Talbothays Dairy and Flint Comb - Ash represent both the good and evil in Tess's life. Throughout the novel Tess is faced with absolute happiness and also total misery. As she moves from location to location the setting of these different places reflect her different emotions. Hardy also uses nature to help the reader identify with Tess's feelings. The natural surroundings and the different seasons are often in keeping with the events of the novel; literacy critics refer to this as the 'Pathetic Fallacy'. Throughout the novel as the seasons change, so does the action, which describes the significant moments in Tess's life. She falls in love in the month of "May". When things are fertile and growing. Her Rape and the death of her body occur in "September" when nature is slowing, dying and decaying. Also Tess marries Angel in "winter". The harshness of winter could represent the collapse and bareness of their marriage. As mentioned before, the locations of Tess's travels are also important. Talbothays Dairy is situated in a "Lush, fertile land" that suggests the natural ripeness of Tess and Angel's love. Flint Comb - Ash's rugged Terrain finds in Tess lots of hardship of labour and the loss of her husband. Our introduction to Tess Durbeyfield is Hardy's description of the "May - day Dancers", dressed in white, the "sun lit up their figures", portrays the character's radiance, children of nature, Hardy symbolises their differences by stating that "no two whites were alike among them". ...read more.

Just as in the world of plants and animals, life renews itself in the spring, so life is renewed in Tess. Talbothays Dairy is the phase of Tess's life in which she experiences her only period of sheer happiness. Set in the month of "May" on a "thyme - scented, bird hatching morning". Here Hardy creates, a sense of joy, he illustrates images of growth and fertility. As Tess's journey to the "Lush Froom Valley", she "felt akin to the landscape". Though she may have felt cut off from the community at Marlott, Hardy shows the reader here that she is very much a part of nature; she still has a chance of renewing her life. Tess and the land reflect each other. Whilst Tess is on her journey there are plenty of descriptions of the landscape, the great use of colour, is to suggest the richness of the place. As Tess is venturing into the world of Talbothays, the description of her surroundings and their effect on her spirits are indicators of the favourable events before her. "Either the change in the quality of the air from heavy to light or the sense of being amid new scenes where there were no invidious eyes upon her, sent up her spirits wonderfully." Here Hardy is saying that the "light" atmosphere and the new scenery is setting Tess's spirits up wonderfully, she is looking forward to what is going to be ahead of her. "Her hopes mingled with the sunshine in an ideal Photosphere, which surrounded her as she bounded along against the soft South wind. ...read more.

She enters the "remains of a village... in a slight depression". The land is horrid with its "Stubborn soil" and Tess realises that "the walls seem to be the only friend she has". It is appropriate that the village is filled with dismal, horrid descriptions, as this is exactly how Tess feels. Tess's loneliness, like that of the village "was excessive". This gloom remains with her for as long ash she stays at Flint Comb - Ash. It is significant of all the hardships Tess has passed through, from her experiences with Alec to her strife with angel, that Tess sees the "desolate drab" of a land in different "degrees of dampness". Tess's heart is as cold as the land. Flint Comb - Ash makes Tess spiritless. She is dismal without Angel and will remain so for as long as she stays. Talbothays and Flint Comb - Ash differ extremely in their descriptions. Talbothays was a utopia in Tess's life. It was depicted with luscious greenery and rolling hills. It was located in the Vale of Froom, which was known for its rich and fertile soil. There nothing could bother Tess. However Flint Comb - Ash was a Barron wasteland, characterized by total misery and pain. It was a cruel place in which Tess spent the worst days of her life. But at the same time she began to appreciate her days at Talbothays. Hardy was able to show through his descriptions of these places how Tess felt throughout the novel. These descriptions let the reader not only see both places, but to feel them as well. This allowed the reader to understand Tess's situation and also take pity on her. The contrast between Talbothays and Flint Comb - Ash was used to symbolise the enormous conflict Tess's life dealt with. ...read more.