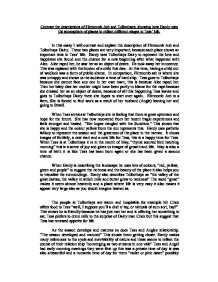 Contrast the descriptions of Flintcomb Ash and Tolbothays, showing how Hardy uses the atmosphere of places to reflect different stages in Tess' life.

Contrast the descriptions of Flintcomb Ash and Tolbothays, showing how Hardy uses the atmosphere of places to reflect different stages in Tess' life. In this essay I will contrast and explain the description of Flintcomb Ash and Tolbothays Dairy. These two places are very important, because each place shows an important time in Tess' life. Hardy uses Tolbothays Dairy to represent the love and happiness she found and the chance for a new beginning after what happened with Alec. Alec raped her, he saw her as an object of desire. He took away her innocence. This was replaced with the burden of a child that dies. At this time, having a child out of wedlock was a form of public shame. In comparison, Flintcomb ash is where she was unhappy and shows us the audience a time of hard ship. Tess goes to Tolbothays because she cannot face any one in her own town, this is because Alec raped her. Then her baby dies her mother might have been partly to blame for the rape because she dressed her as an object of desire, because of all this happening Tess leaves and goes to Tolbothays Dairy there she hopes to start over again. Flintcomb Ash is a farm, She is forced to find work as a result of her husband (Angle) ...read more.

After Angles confession Tess is sure that he will under stand and forgive her. "O, Angel-I am almost glad-because now you can forgive me! Tess tells Angle about her past but she later regrets it as he is very angry and leaves, leaving Tess to look after herself. Tess feels she must leave the farm because the farm was more part of Angels life than her own and she may not be welcome there anymore under the circumstances, So after talking to a friend about a farm who are always needing employees, she set off on her way to Flintcomb-Ash. As she made her way to Flintcomb-Ash winter drew in within days becoming shorter symbolising her hope for Angels return starting to disappear. "With the shortening of the days all hope of obtaining her husbands forgiveness began to leave her", she doesn't think that Angel will forgive her so therefore never returns again. She is also surrounded with a sense of death represented by the dead pheasants in the field, "rich plumage dabbed with blood". This is another example of where blood is brought into Tess' life as if Hardy is trying to tell us death and fear is never far behind and will soon catch up. As Tess nears the farm she finds she is attracting unwanted attention of men but she feels that she can only let herself be loved by Angel so she scrapes her face and puts a shall over her head so her beauty cannot be seen. ...read more.

She is also scared of Alec who decided to come and visit Tess. To Tess' unawareness Alec entered the farm leaving the workers guessing who he was, "I'll lay a guinea he's after Tess". Hardy uses the image of Tess being forced to keep feeding the machine with wheat to represent the fact that Tess has to constantly become a slave to somebody in order to survive through life. For example when she told Angle, "I will obey you like your wretched slave". Tess is currently at a very low part in her life and Hardy uses Alec's appearance at the farm to represent this as she was also at a low point on her first meeting with Alec. In conclusion, Hardy has made these two different place (Talbothays and Flintcomb - Ash) very important parts in his novel because together with the use of colour, similes, metaphors, personification, pathetic fallacy and Hardy's good use of description, it helps us to create two different parts in Tess' life. One of which was full of love with Angle, happiness and sunny days spent at Talbothays. But in total opposite to this she also spent an equally important part of her life at Flintcomb - Ash. Where she felt nothing but pain and suffering in the long cold hard months she spent there, to give an image of her break up with Angel and the thought that she may be left with a future of suffering compared with what she could have had at Talbothays. ...read more.