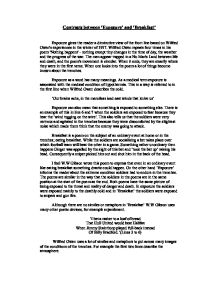 Contrasts between 'Exposure' and 'Breakfast'.

Contrasts between 'Exposure' and 'Breakfast' Exposure gives the reader a diminutive view of the front line based on Wilfred Owen's experiences in the winter of 1917. Wilfred Owen repeats four times in his poem 'Nothing happens' - nothing except tiny changes in the time of day, the weather and the progress of the war. The men appear trapped in a No Man's Land between life and death, and the poem's movement is circular. When it ends, they are exactly where they were in the first verse. When one looks into the poem a lot of things become known about the trenches. Exposure as a word has many meanings. As a medical term exposure is associated with the medical condition of hypothermia. This in a way is referred to in the first line when Wilfred Owen describes the cold. 'Our brains ache, in the merciless iced east winds that knive us' Exposure can also mean that something is exposed to something else. There is an example of this in line 6 and 7 when the soldiers are exposed to fear because they hear the 'wind tugging on the wire'. This also tells us that the soldiers were very nervous and agitated in the trenches because they were discomforted by the slightest noise which made them think that the enemy was going to attack. Breakfast is a poem on the subject of an ordinary event at home or in the trenches; eating breakfast. ...read more.

'Breakfast' is a poem emphasizing that in the trenches even in the most ordinary events something unexpected could happen. The poem takes place in the trenches where group of soldiers are eating breakfast. Whilst this is happening a bet takes place over a football game between Hull united and Halifax. The bet was over a rasher and a loaf of bread. This tells us that the soldiers did not have much money therefore they bet over food. Ginger (a character in the poem) was appalled by the sight of this so he 'took the bet' raising his head above the trench wall, consequently a sniper shot him in the head. This seems much unexpected to the reader but the end of the poem is a repetition of the first to lines. This tells us that the soldiers had to except the unexpected and carry on with their duties; otherwise if they were to mourn for every one who died they would never survive. Many images are created in this poem for example 'That Hull united would beat Halifax.' An everyday conversation on which football team would win a match when played between them. This creates a picture of the soldiers socialising and having some fun. I feel that 'played full-back' also gives an image of the soldiers being in defence of their enemy because it has a relation with the defence of a football match. ...read more.

This is quite an unexpected word to use because one would probably expect a word like 'break' or 'disrupted'. 'Streak' gives the image of the bullets flying through the sky like jets which leave a trail of smoke behind them as they cut through the sky. There is an example of personification in the very first line of Exposure 'Our brains ache, in the merciless iced east winds that knive us' This personifies the wind because it feelings or a personality therefore it can't be merciless. Also the wind can't knive (stab) someone because there is no possible way it can posses a knife. In conclusion I feel the main message Wilfred Owen is putting across in Exposure is about the conditions of the war in the trenches and to all the different situations the soldiers were exposed to. Breakfast puts the message across that in the trenches, even in the most ordinary situation the most unordinary thing could happen. In both poems the poetic devices and language are very dramatic. The whole of Exposure is very tense through out with many poetic devices to emphasize key parts of the poem. Although breakfast is a short poem it is very dramatic but put across in quite a subtle manor. In both the poems the poetic device are very effective. They create tension and suspense. For example in Exposure the repartition of 'But nothing happens' creates suspense because the reader then think 'when is something going to happen?' ...read more.