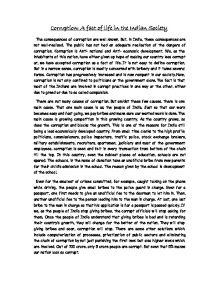 Corruption-A fact of life in the indian society

Corruption: A fact of life in the Indian Society The consequences of corruption are well known. But, in India, these consequences are not well-realised. The public has not had an adequate realisation of the dangers of corruption. Corruption is Anti- national and Anti- economic development. We, as the inhabitants of this nation, have either given up hope of making our country less corrupt or, we have accepted corruption as a fact of life. It is not easy to define corruption. But in a narrow sense, corruption is mostly concerned with bribery and it takes several forms. Corruption has progressively increased and is now rampant in our society. Now, corruption is not only confined to politicians or the government alone. The fact is that most of the Indians are involved in corrupt practices in one way or the other, either due to greed or due to so called compulsion. There are not many causes of corruption. ...read more.

Even for a passport, one first needs to give an unofficial fee to the doorman to let him in. Then, another unofficial fee to the person leading him to the man in charge. At last, one last bribe to the man in charge so that his application is for a passport is passed quickly. If we, as the people of India stop giving bribes, the corrupt officials will stop asking for them. Once the people of India understand that giving bribes is bad and is retarding their country's growth, they will change for the better of the nation. They will stop giving bribes and soon, corruption will stop. There are some other solutions which include computerization of processes, privatization of public sectors and eliminating the chain of corruption by not just punishing the first level but also higher levels which are involved. Out of 100 crore, only 5 crore people are corrupt. ...read more.

It is not only the public or only the government who have to change, it is all the Indians who will have to change for the better of our nation. The irony is that, at the end of everything, India is still considered to be a very religious country and it is still widely believed that the religion is the basis of Indian life, thoughts and actions. Are not religions against corrupt and dishonest practices? The unfortunate situation in India is that those who call themselves most religious are often found to have indulged themselves in dishonest practices on many occasions. It is high time that we, as a nation, realise that this is wrong and should be stopped. In the Global Corruption Index, India stood 83rd in the world, alongside Malawi and Romania. India recorded a score of 2.8 out of 10. Last year, India's score was 2.7 out of 10, but it stood 71st in a list of 102 nations, unlike 133 this time. I would just like to say stop corruption, save India. Done By: Aayush Shah Grade: 10. ...read more.

A generally good piece of persuasive writing; the piece becomes more persuasive throughout with the latter stages having the most impact. The style of writing needs to be matured through the inclusion of a greater variety and range of sentence structure, punctuation and vocabulary.