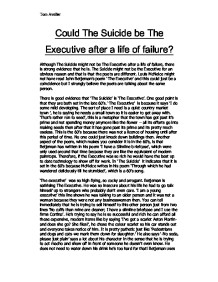 Could The Suicide be The Executive after a life of failure?

Could The Suicide be The Executive after a life of failure? Although The Suicide might not be The Executive after a life of failure, there is strong evidence that he is. The Suicide might not be the Executive for an obvious reason and that is that the poets are different. Louis McNeice might not have read John Betjeman's poem 'The Executive' and this could just be a coincidence but I strongly believe the poets are talking about the same person. There is good evidence that 'The Suicide' is 'The Executive'. One good point is that they are both set in the late 60's. 'The Executive' is because it says 'I do some mild developing. The sort of place I need is a quiet country market town ', he is saying he needs a small town so it is easier to get away with. 'That's rather run to seed', this is a metaphor that the town has got past it's prime and not spending money anymore like the flower - all its efforts go into making seeds then after that it has gone past its prime and its pretty much useless. This is the 60's because there was not a licence of housing until after this period of time. ...read more.

'I call her "Mandy Jane" After a bird I used to know'; the sentence implies that he is a loner and probably didn't have many girlfriends. That was probably his only one! He has to use that type of language such as 'bird' to show to other person that he does not respect women because he thinks that will make him look good. This also proves it is in the 60's because of the type of language used. The syntax 'I also own a boat which has never touched the water' shows the listener that he is so rich and successful that his life has reached the point that he can buy things that he does not need. However, the pragmatics behind this could suggest something quite different. Could it not be that is a depressing thought to him that he has worked so hard for something he has never used? Is that then not continued to the thought that perhaps working is pointless for him, and hence his life is pointless and empty. Could that state of mind not lead him to feel like committing suicide? I think so anyway. It seems his life is just purely for showing off to strangers at 'roadside hostelries' especially and that wouldn't last forever and later on begin to question his life (as in 'The Suicide') ...read more.

He is questioning his unanswered life there. 'Nodding under the paperweight in the breeze', it is another metaphor and it the nodding is almost like the Jury nodding their heads to say he's guilty of his life being worth nothing. The breeze signifies that the window is open and ready for him to jump off a high up floor in this hotel or 'roadside hostel'. It shows that his life is rock bottom and then it even says 'Receiver that never got mended' which proves he can't even pay the phone bill he's so much in dept. 'With his last doodle which might be his own digestive track', you can imagine him drawing almost like a spiral and that's his life. Gradually going down. 'Till he stumbled" is talking about how his life was so great before and now he stumbled and lost everything. When you read on in the poem, you see that he is pressing so hard on his pencil that it breaks and that in my opinion is a metaphor for his breaking life that cannot be mended. It is easy to see that someone like the young Executive who is successful and rich can suddenly want to take his own life. That is why I do think 'The Suicide' is 'The Executive' after a life of failure. ?? ?? ?? ?? Tom Avellar ...read more.