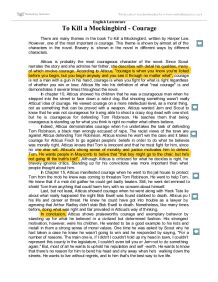 Courage in To Kill A Mockingbird

English Laterature To Kill a Mockingbird - Courage There are many themes in the book To Kill a Mockingbird, written by Harper Lee. However, one of the most important is courage. This theme is shown by almost all of the characters in the novel. Bravery is shown in the novel in different ways by different characters. Atticus is probably the most courageous character of the novel. Since Scout narrates the story and she admires her father, she describes with detail his qualities, many of which involve courage. According to Atticus, "courage is when you know you're licked before you begin, but you begin anyway and you see it through no matter what", courage is not a man with a gun in his hand, courage is when you fight for what is right regardless of whether you win or lose. Atticus fits into his definition of what "real courage" is and demonstrates it several times throughout the novel. In chapter 10, Atticus showed his children that he was a courageous man when he stepped into the street to face down a rabid dog. But shooting something wasn't really Atticus' idea of courage. He viewed courage on a more intellectual level, as a moral thing, not as something that can be proved with a weapon. Atticus wanted Jem and Scout to know that he was not courageous for being able to shoot a crazy dog dead with one shot; but he is courageous for defending Tom Robinson. ...read more.

Although he knew it was dangerous and he was scared to go, Jem went to the Radley place because he prefered going there than facing Atticus with explanations. (Both cases would have involved courage.) In chapter 11, Jem destroyed Mrs. Dubose's camellias when it was a well-known rumor that she was armed with a Confederate pistol at all times. Although Jem was familiar with the rumor, his rage pushed him beyond caring that he might be hurt or get into trouble because Mrs. Dubose had bad-mouthed Atticus, and Jem just couldn't take it. Scout is growing up through the novel. Atticus educating her is a great part of what she recounts. Scout shows courage by maturing because maturing involves being brave, having your own opinions and stand up for yourself. When Atticus told Scout to stop fighting the people that mock her Scout had to be brave enough to ignore the harsh remarks and put herself above them. The courage to change is very important, because not everybody is able to do it, and of course changing a habit or something like that can change your life radically. "When I committed myself to a policy of cowardice. Word got around that Scout Finch wouldn't fight anymore, her daddy wouldn't let her." That was an act of great courage because Scout used to fight a lot, but because she had promised to her father that she would stop fighting, she could not fight anymore. ...read more.

His lips parted into a timid smile, and our neighbor's image blurred with my sudden tears. 'Hey, Boo,' I said." He is courageous when he is needed, although he does not like being around other people in society. In chapter 30, Boo was awarded by Heck Tate at the end of the novel: Everyone in the house knew that it was Boo who actually killed Bob Ewell, but it was Heck Tate that said Boo was innocent. He did this because he knew what Mr. Ewell did was wrong. This was his way of thanking Boo for saving Atticus' children: He let an injustice occur. Although he had to lie to protect Boo Radley, he knew that keeping his role in Bob Ewell's death a secret was the right thing to do. To conclude, Harper Lee's novel To Kill a Mockingbird shows how courage can be shown in different ways. It takes a great deal of courage to tell the truth instead of denying it. Also, to be in minority and remain there, because of your beliefs or other reason, is a courageous act. And not to forget, change is an act of courage of which many people are afraid. Courage is doing what you are afraid of, and in the end the kind of courage that gets you from one moment to another is the courage that matters. Many people showed courage in this book, but ultimately it is Atticus that teaches us that, "Courage is knowing you're licked from the start, but starting anyway." ...read more.

This is a good essay clearly showing understanding of the novel and the theme of racism throughout the novel.
There are some examples of thoughtful analysis and where further explored and supported by quotes this elevates the essay into the top band.
However there are also areas where statements are inconclusive and need more explanation.
As the essay is focusing on racism more social and historical context would have been useful
****