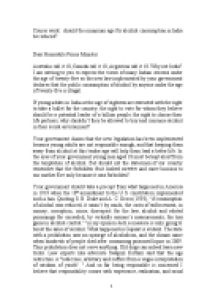 Course work : should the minimum age for alcohol consumption in India be reduced?

﻿Course work : should the minimum age for alcohol consumption in India be reduced? Dear Honorable Prime Minister Australia call it 18, Canada call it 18, Argentina call it 18. Why not India? I am writing to you to express the views of many Indian citizens under the age of twenty-five as the new law implemented by your government declares that the public consumption of alcohol by anyone under the age of twenty-five is illegal. If young adults in India at the age of eighteen are entrusted with the right to take a bullet for the country; the right to vote for whom they believe should be a potential leader of a billion people; the right to choose their life partners, why shouldn?t they be allowed to buy and consume alcohol in their social environment? Your government claims that the new legislation has been implemented because young adults are not responsible enough, and that keeping them away from alcohol at this tender age will help them lead a better life. ...read more.

2 And so far being responsible is concerned I believe that responsibility comes with experience, realization, and social maturity, not just age. Legend has it that force hardly succeeds in giving desired results. It would be foolish to deny that India with its vast population of 1.15 billion, accounting for 17.31% of the world?s population, has, unfortunately, been witness to an increasing alcohol-related death rate per year. However, enacting a law where young people of age 18 can be imprisoned for ?chugging? a glass of beer, or ?downing? a shot of vodka in a pub is hypocritical because at the same age, here in India people are allowed to start their own enterprises, which include permission to open a club or bar, and work in them. If young adults, as bartenders are allowed to twirl vodka and whiskey bottles in fancy clubs, serve people alcohol all night, but not allowed to take a small sip of what they are serving, is that not hypocritical? If denied permission to drink in public, young adults under the age of twenty-five will not only perceive alcohol to be a ?forbidden fruit?, ...read more.

We know young adults drink alcohol anyway, but what is your government doing to help them out? How are you controlling young adults from turning up highly intoxicated to parties? If your government fears excessive drinking at the age of 18, why is no support being provided? What your government can do is install CCTVs in liquor stores, and make harsher punishments for alcohol vendors for serving alcohol to young adults of age 18. According to your government an 18 year old can get married, in that case would the marriage get raided as the couple picks up a glass of champagne to celebrate? Why are 18 year olds barely allowed to their right to freedom of choice and responsibility of their own body and mind? When an 18-year-old woman has the right to marry and beget a child, what stops her from taking a sip of liquor to enjoy the first birthday of her child? Does not the age restriction look absurd in such a case? It is time the politicians understood that prohibition, unless backed by strong and relevant data, does not serve any end; sometimes the reverse may just occur. 1. http://www.albany.edu/~wm731882/18th_amendment_final.html 2. articles.timesofindia.indiatimes.com ? Collections ? Alcohol ...read more.